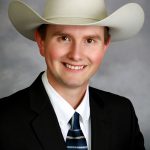 Leif grew up on his family’s farm and ranch north of Lemmon, South Dakota in Southwestern North Dakota. He went to school in Lemmon participating in 4-H, FFA, music, and sports. Leif was also a radio DJ at the local station, KBJM, and broadcast under the name ‘Leify Spurge.’ He attended Minot State University receiving his bachelor degree in broadcast production, minor in marketing and a concentration in sportscasting. Leif is also a June 2015 graduate of Western College of Auctioneering. While at Minot State he was the online play-by-play announcer for all the Beaver home sporting events including football, volleyball, women’s soccer, men’s and women’s basketball, wrestling, softball and baseball. While announcing for the Beavers he announced a total of 322 games.

Leif was hired on to the Northern Ag Network team as an Ag Broadcaster in June 2018. In his spare time, Leif enjoys playing cards, fishing, and traveling around the country meeting producers in Northern Ag Territory.