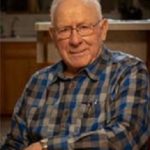 Donald “Don” James Steinbeisser, of Sidney, Montana, went to be with the Lord in the early morning hours of September 12, 2020. He died peacefully in his sleep at his adopted home in Billings after a long battle with heart disease. Don was born on April 15, 1935 in Sidney, Montana, to Joseph G. and Mary M. (Schuhart) Steinbeisser. Don grew up the second of five children on the family farm south of Sidney. He graduated from Sidney Senior High School in 1953 and chose to pursue his passion for farming; working alongside his father and younger brother, Joe. In 1957, he attended the annual Fourth of July Street Dance and it was there he met his bride of 46 years, Leona Gierke. Don and Leona were united in marriage at St. Philomena’s Church in Sidney on August 29, 1959. They made their home on the family farm. In June of 1960, James Eugene, the first of their five children, was born followed by Donald James Jr. (1961), Craig Joseph (1964), Janet Kae (1967) and Trisha Marie (1975).

Don believed in God, family, country and community. He served in the US Army Reserves from 1957 to 1962, the Montana House of Representatives from 2000 to 2005 and the Montana State Senate from 2005 to 2012. He was proud of his time spent in the Montana State Legislature and was highly respected on both sides of the aisle for his calm demeanor on contentious issues and his ability to sincerely listen to all sides. You could often find him telling members of his care team all about his time in Helena. Helena is also where he found love again after Leona’s passing. Amelia (Lia) Pirrone brought Don a cup of coffee. That cup of coffee turned into a beautiful marriage. Lia and Don enjoyed many spontaneous trips to see friends on the back roads of Montana, traveling to visit their kids and out-of-state friends and many laughs. They would have celebrated their 13th wedding anniversary, December 1, 2020.

Farming and cattle played a big role in Don’s life. He was a proud second-generation farmer/rancher. He served on the local and national Sugar Beet Grower’s Associations for many years and was involved in Farm Bureau and the Lower Yellowstone Irrigation Project. Don often traveled to Washington, DC, and “across the pond” to lobby on farm bills and trade agreements. In fact, on 9/11 Don was in Washington, DC at the US Capitol building.

First Bank, f.k.a. First United Bank, was also a big part of Don’s life. He served as a Director of First Bank from the mid-1980’s until it sold in 2014. Don’s involvement in First Bank was the reason his daughter, Trisha, went into banking. They would often discuss banking regulations and bank policies. In fact, Don loved talking business with all his kids and anyone who’d listen. Leona used to tease Don that his life was full of B’s: beets, beef, banking, barley and bull@*#&!