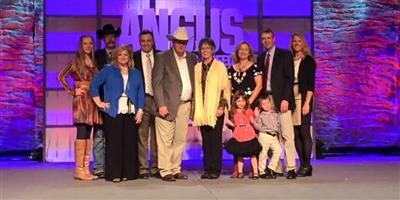 The Angus breed and the American Angus Association owe an incalculable debt to the many men and women who have worked tirelessly to make Angus cattle and the organization leaders in the beef cattle business.

Each year, the Association recognizes breed leaders and their contributions by inducting individuals into the Angus Heritage Foundation. Four new additions were honored Nov. 5 during the Association’s Awards Recognition Breakfast, hosted as part of the Angus Means Business National Convention & Trade Show.

The 2015 inductees are: Keith Stevenson, Montana; C.K. Allen, Montana; Dr. Curtis Long, Missouri; and the late David Danciger, Colorado. Read more about their contributions in the paragraphs that follow.

[EasyDNNGallery|3051|Width|350|Height|350|position|left|resizecrop|False|lightbox|False|title|False|description|False|redirection|False|LinkText||]Central Montana’s Judith Basin is where Keith Stevenson calls home. The area is historically renowned as prime cattle country, and Stevenson was born there as the young Angus breed slowly began to spread throughout the region. In many respects, he grew up right along with the family’s cattle operation, Stevenson Angus Ranch.

This year marks the 55th annual production sale at the ranch, a tradition that started when Stevenson was a teenager. In 1967, he participated in the very first National Junior Angus Showmanship contest in Lexington, Ky., and would go on to serve the breed nationally on the American Angus Association’s Board of Directors, serving as president from 1992-1993.

A graduate of Montana State University, Keith holds degrees in animal science and agriculture education. He was instrumental in establishing and hosting the first Montana Angus Tour in 1974, which has grown into one of the nation’s strongest state events.

Today, Keith and his wife, Roberta, live only a few hundred yards from the house where he grew up, but the reach of their operation goes worldwide. The Stevensons have exported embryos and live cattle to every continent except Antarctica, and launched joint businesses in South America and Europe.

He was recognized, along with his brother, Wayne, and mother, Jeanette, as the 1996 U.S. Livestock Man of the Year, presented during the National Western Stock Show. That same year, their operation was also recognized with the CAB Seedstock Producer Award.

As a former American Angus Association executive vice president, C.K. Allen has left a lasting impact on the business breed. Beginning in 1978, he served three years as the organization’s top official in Saint Joseph, Mo.

Allen played an important role in several monumental accomplishments for the breed. He was part of the team that established the Certified Angus Beef® (CAB®) brand, purchased the Angus Journal, and started the Angus Foundation and the junior Angus program, previously part of the Association’s activities department.

A native of Virginia, Allen grew up on the family Hereford operation near Williamsburg and graduated with a degree in animal science from Virginia Polytechnic Institute (VPI) in Blacksburg. After serving in the U.S. Air Force, he returned to VPI for his master’s degree and later earned a doctorate in ruminant nutrition from Michigan State University.

Following his tenure with the American Angus Association, Allen joined the faculty at Northwest Missouri State University in Maryville, Mo., where he taught beef production, meats, animal breeding and livestock marketing during his 20 years on campus. He also established the university’s first bull test.

In 1977, he founded Woodland Farms, a purebred cattle-breeding operation that continued nearly 30 years. Allen was honored with the 2002 Pioneer Award from Certified Angus Beef LLC (CAB) and was also named the brand’s Seedstock Commitment to Excellence Award winner that same year.

In 2009, Allen moved to Hinsdale, Mont., to be closer to his grandchildren and family. Naturally, he keeps a small Angus herd and continues his involvement through youth development in local 4-H and FFA programs.

A pioneer in rural health care, Dr. Curtis Long has been breeding Angus cattle and building his medical practice in Butler, Mo., for more than 50 years. Briarwood Angus Farms encompasses nearly 2,000 acres, including 320 acres of native prairie. The 220-head registered Angus herd was built on genetics from the Wye Plantation, purchased when the farm was established in 1964.

An advocate for Angus youth and the Angus Foundation, Long established an endowment to sponsor the carcass steer competition at the National Junior Angus Show (NJAS). The 2013 NJAS in Kansas City, Mo., was dedicated to Long and his wife, Ann.

The son of humble farmers, Long grew up near Festus, Mo., and later attended the University of Missouri (MU) in Columbia. He holds a bachelor’s degree in agricultural biochemistry and graduated from MU’s medical school in 1963.

The 2010 Missouri Physician of the Year, Long was recognized by MU’s School of Medicine for developing a residents training program that teaches physicians the skills necessary for bringing comprehensive care to rural areas.

A Harvard graduate with an economics degree, the late David Danciger’s lifelong passion for Angus cattle began in 1950. Since that time, he and wife Emma have continued to produce high performing, registered Angus cattle adaptable for all environments.

Danciger’s life membership in the American Angus Association dates back to 1952, when he started Cedar Hills Ranch south of Dallas, Texas. A scientist at heart, David concentrated on continuous genetic improvement within his Angus herd. He was an early adopter of artificial insemination (AI) and set up a bull collection facility and lab on the Texas ranch.

In 1980, the Dancigers brought 50 Angus cows to Carbondale, Colo., and established Tybar Angus Ranch. An environment much different than ranching in Texas, they faced the challenge of adapting their herd to the severe cold, high altitudes and intensive land management.

True to his nature, David met the adversity with science.

In 1984, he joined Colorado State University’s research project to evaluate lung and heart capacity of yearling calves, by means of pulmonary arterial pressure (PAP) testing to determine the effects of high altitude stress in Angus cattle. This groundbreaking information revealed this was a condition, not a disease, similar to hypertension in humans.

David’s life motto was, “Life is a learning experience,” and he practiced that fully until 81 years old. His family continues the Tybar commitment to excellence, producing quality genetics for seedstock and commercial operations in all environments.

For more information about Angus cattle and the American Angus Association’s programs and services, visit www.ANGUS.org.