Northern Ag Network spoke to Jon Verhelst with Corteva during the 2018 Commodity Classic on what producers can do to get a head of Canada Thistle.

“Canada thistle grows from the roots as well as the seed. Choosing the right chemistry and timing for postemergence control is critical,” says Yenish. “Clopyralid, an active ingredient in PerfectMatch herbicide, is the industry standard for postemergence in-season control of this noxious weed.”

Consistent, broad-spectrum control
PerfectMatch® herbicide is a broad-spectrum herbicide that effectively controls annual grasses, such as wild oats and foxtails, along with annual broadleaves, such as kochia and wild buckwheat, as well as perennial Canada thistle.

“Typically, Huskie Complete will provide more visible control one week after treatment, because it gives you a very quick discoloration of the foliage. But you are not getting a complete kill,” Yenish says. “That changes as the length of time after application increases. By harvest time, the farmer combining will see much less Canada thistle control from treatments of Huskie or Huskie Complete than with treatments of PerfectMatch.” 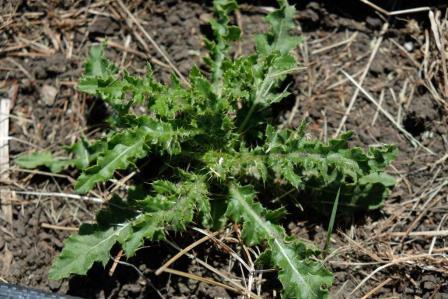