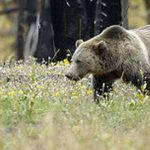 Grizzly bears never appear to be very far from a lawsuit. Last week, a lawsuit was filed in U.S. District Court in Washington by the Center for Biological Diversity and the Sierra Club, who sued the federal government over livestock grazing on public lands and it’s impact on grizzly bears.

The lawsuit was filed against the U.S. Fish and Wildlife Service, U.S. Forest Service, Interior Secretary David Bernhardt and Fish and Wildlife Director Aurelia Skipwith. The environmental groups allege that livestock grazing on forest permits in Wyoming results in grizzly bears being killed by ranchers and wildlife managers for depredating on cattle.

In October of 2019, the Forest Service decided to continue allowing livestock grazing in the Green River headwaters of the Bridger-Teton National Forest in Northwest Wyoming. Grizzly bears continue to be classified as a threatened species and are given federal protections. However, wildlife biologists found that over the course of a decade as many as 72 grizzlies could be killed if necessary, without negatively impacting the overall population of grizzlies in the Greater Yellowstone Ecosystem.

In the last 20 years, 35 grizzly bears have been killing on the grazing allotments. The National Park Service estimates that as of 2019 there were 728 grizzlies in the Greater Yellowstone Region. That’s up from 136 bears in 1975. Wildlife officials have long-maintained that the number of grizzlies in the region is more than large enough to justify lifting the protections provided under the Endangered Species Act.

Grizzly bear hunts were planned for in both Wyoming and Idaho in 2018, but a federal judge in Montana reinstated protections for the bear. Currently, officials in Wyoming, Montana and Idaho are appealing the court’s ruling.