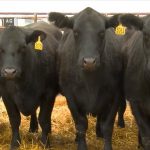 It was a happy Thanksgiving for U.S. beef producers. The European Parliament voted last Thursday to approve a plan that grants the U.S. a country-specific share of the European Union’s duty-free, high-quality beef quota. The agreement, which was signed and announced in August, is detailed in this press release from the Office of the U.S. Trade Representative.

American ranchers will be guaranteed a bigger share of Europe’s beef market, with annual duty-free exports expected to grow from $150 million to $420 million when the agreement is fully implemented.

U.S. Meat Export Federation (USMEF) President and CEO Dan Halstrom commented that “lack of capacity in the duty-free quota has hampered the ability of European importers to consistently secure U.S. beef for their customers. Because the quota is administered on a quarterly basis, importers must often wait several weeks for a new quarterly allocation to open before more U.S. beef can enter the EU at zero duty. This has also been a source of frustration for U.S. producers and exporters who have invested in the production and processing of non-hormone treated cattle – which is required for beef exported to the EU.”

“The European Union is one of the highest value destinations in the world for U.S. beef,” Halstrom says. “Consistent access will not only benefit U.S. producers and exporters, but also European importers and their clientele. USMEF thanks USTR and USDA for negotiating this agreement and securing its approval, which will bolster the U.S. industry’s efforts to expand the European customer base for U.S. beef.”

Approval by the European Parliament keeps the agreement on track for implementation in early 2020, clearing the way for consistent, year-round access for U.S. beef.