A new analysis shows total farm debt is near record levels and farm real estate debt is at an all-time high. Agricultural Economic Insights found that, total debt stands at $425 billion, just short of the 1981 peak of $440 billion. However, the annual increase from 2000 to 2020 has been achieved through the relatively consistent small increases in debt, as opposed to a rapid run-up.

The analysis says at present, it would seem that the current levels are sustainable, but with little room for further growth, adding, that while it is quite likely that the sector will navigate through this territory with few problems, it also removes some of the room for error. 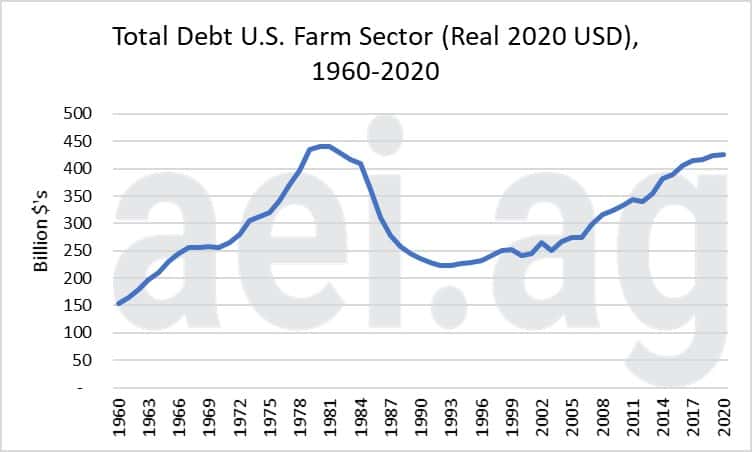 Although there have been many stories of increased farm bankruptcies, the fact that the current level of debt to cash income has not resulted in what could categorize as widespread financial distress.  For instance, the rate of farm bankruptcies, while increasing, is nowhere near the levels observed in the 1980s.  This would suggest that perhaps the current level of debt to income is acceptable going forward.

However, a substantial portion of net cash farm income in the last few years has come in the form of government program payments.  The troubling part of this fact is that many of the dollars have flowed from ad hoc program payments, such as the market facilitation program (MFP).  Had the government not authorized the last two rounds of MFP programs, the financial condition in the farm sector would be much worse.