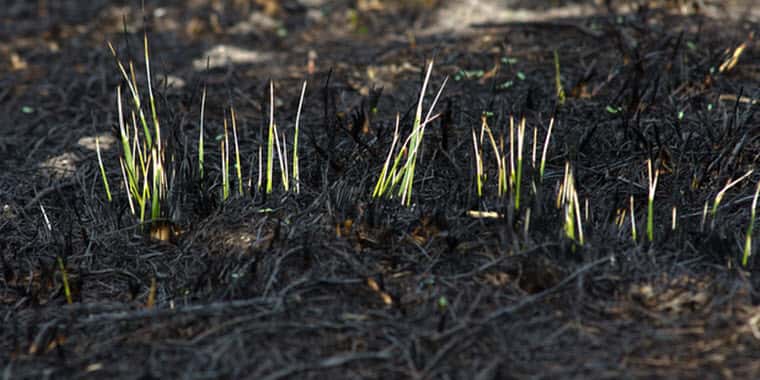 With dry and drought conditions in the late summer and fall, crops dry down rapidly and harvest starts early. The climate outlook may be favorable for an uninterrupted run at harvest. However, the risk of fires during harvest is always a concern for farmers.

Producers in the drier regions of South Dakota know that fires can not only result in losses of a combine or grain, but can also result in long-term production issues in fields. Fields where fires occurred are often left bare. This makes those areas susceptible to soil erosion from winter winds. Lost residue equates to lost nutrients and carbon that is held in the residue. Carbon is a substantial component of soil organic matter and can contribute to long term soil health. Winter snow catch is decreased and evaporation rate is increased in those areas where fires have destroyed crop residue. This directly correlates to yield loss in future years.

Yield loss can be documented. But losses of nutrients (carbon, nitrogen, phosphorus and potassium) from burned residue, along with soil loss from wind erosion, are more difficult to evaluate.

One central SD producer, a long term no tiller, took residue samples from the non-burned and burned areas of his field after a fall fire burned through a large area of his field. The samples were submitted for analysis to a reputable private soils lab. The lab put a value of $608.00/acre on the nutrient losses (carbon, nitrogen, phosphorus, potassium and sulphur). The producer also noted that yields on burned areas were 50% of yields on unburned areas for two years after the fire. Yield differences were substantial in the third year after the fire as well. He said he fully expected it to take 5 years for burned areas to return to full production, however substantial moisture the fourth year after the fire helped to mitigate the losses. In this situation the producer took extra steps to document his losses.

Harvest fires can occur in any crop, but some crops present increased risk during harvest. In 2011, SDSU researchers noted that sunflower head dust had a lower minimum ignition temperature, and was more easily ignited than corn stover. (The Sunflower, August/September 2012).

With harvest just beginning, producers are encouraged to take time to clean and maintain their equipment before starting.

Equipment should be checked over carefully. Look for worn bearings and other areas that could overheat. Wires that are damaged or have worn insulation are also cause for concern, as well as frayed belts. Check fuses, they should match recommended capacity.

Areas where chaff or plant material accumulate and build up should be thoroughly cleaned before harvest starts. This should also be done at regular intervals throughout harvest including before shutting down in the evening and periodically each day. Keep a leaf blower on hand so the combine operator can do this when necessary.

It is always a good idea to keep a fire extinguisher in the cab. However a second one on the outside of the combine may also be beneficial for others to reach if necessary. Make sure fire extinguishers are charged and in good working order.

The best solution to field fires is to try to avoid them. Producers know this and often have water tanks or trucks close by. Shutting down when conditions get too extreme are other common precautions designed to keep fires from starting are also important. If the threat of extreme dry conditions and combine fires persists, try nighttime harvesting, when humidity levels are higher.

There are several weather factors that can lead to enhanced fire danger across South Dakota during the fall. These include Abnormally Dry or Drought conditions, little to no precipitation over a 2+ week timeframe, above average temperatures, low humidity, and strong winds.

Drought combined with short-term precipitation deficits prime the fuels to be receptive to both ignition and fire spread. If we then see weather with warm temperatures, low humidity, and strong winds, the environment becomes very favorable for large fire growth. Be sure to keep an eye on the forecast to watch for days with these conditions. Key in on cold fronts in the fall: often warm, dry, and windy conditions exist ahead of the cold front while cool, dry, and very windy conditions follow the frontal passage. Both pre-frontal and post-frontal conditions have historically brought large September and October fires to the state.

It is smart to watch the weather outlooks for one to two weeks in advance as well as to monitor the daily forecasts. Keep wildfire in mind when going about your day and do your best to prevent being the ignition source. Fires can start and spread quickly in harvest season, even without a Red Flag Warning or county burn ban in place.

If you do experience a fire be sure to take pictures and document, not just yield losses, but residue losses as well. Fires can impact fields for a number of years.