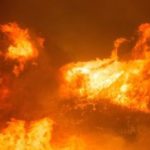 A “cold storage” building at Kist Livestock in Mandan, North Dakota was destroyed by fire on Sunday.

No one, including livestock, was injured during the incident, however several tractors, equipment and the out building was a complete loss. Luckily the fire did not spread to any other areas including a nearby hay stack and the main sale barn.

Northern Ag Network’s Andy Schwab spoke with a representative from Kist Livestock who said business will still run as scheduled. Kist Livestock, is owned and operated by Bill & Jerry Kist. It is one of the largest livestock auction markets in North Dakota selling over 5 million cattle since 1956.

According to KX News, owner Jerry Kist said early damage estimates are over $100,000.

The cause of the fire is still under investigation.