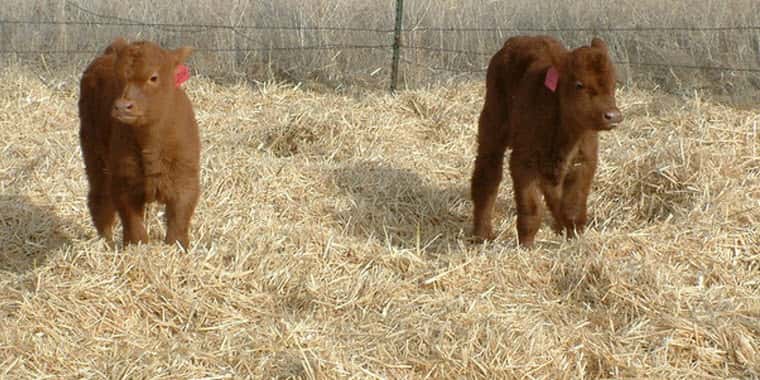 Calving season is nothing new to Don Eakman.

For more than 40 years he's lived in a farmhouse overlooking the Sun River, splitting his time between teaching elementary school and caring for a small herd of registered Red Angus cattle. So when it comes to helping baby calves enter the world, not a lot surprises him.

This year it did.

During the last three weeks of February, five of the first eight cows to gave birth on the Eakman ranch delivered twins — all of which survived and are now happily romping across Eakman's pastures on the western edge of Great Falls.

While twin births in cattle is not unheard of, it is unusual.

According to a report in the Journal of Animal Science, dairy cattle are far more likely to deliver twin calves than are beef cattle.

Holsteins, for example, typically deliver twins about once in every 29 live births. Brown Swiss are even more prolific, birthing twin calves once in about every 11 deliveries. However Angus cows, like Eakman raises, only deliver twins once in every 91 live births. The arrival of five sets of twins at the Eakman ranch is even more improbable considering that Don's entire herd consists of 34 cows.

“I ended up with three sets of twins before I had one cow with a single calf,” Eakman said, a hint of disbelief in his voice. “I've never had twins like this before.”

Immigration Enforcement-only Approach a Threat to Farming and Ranching