“Every region of the state faces severe to extreme drought conditions, and the situation is getting worse. These alarming drought conditions are devastating our ag producers, challenging our tourism industry, and could bring a severe wildfire season,” Gov. Gianforte said. “This emergency order makes available all necessary state government resources to mitigate the impacts of this drought and protect Montanans.”

Executive Order 11-2021 directs the Departments of Agriculture, Livestock, and Natural Resources and Conservation to provide maximum assistance to the U.S. Department of Agriculture on drought-related activities to secure timely economic assistance from the federal government.

Approximately 14 percent of the state is in D3 classification (extreme drought), 34 percent in D2 (severe drought), 21 percent in D1 (moderate drought), and 23 percent in D0 (abnormally dry). Further, over the course of the next eight to ten weeks, drought conditions will likely worsen across most, if not all, of Montana. 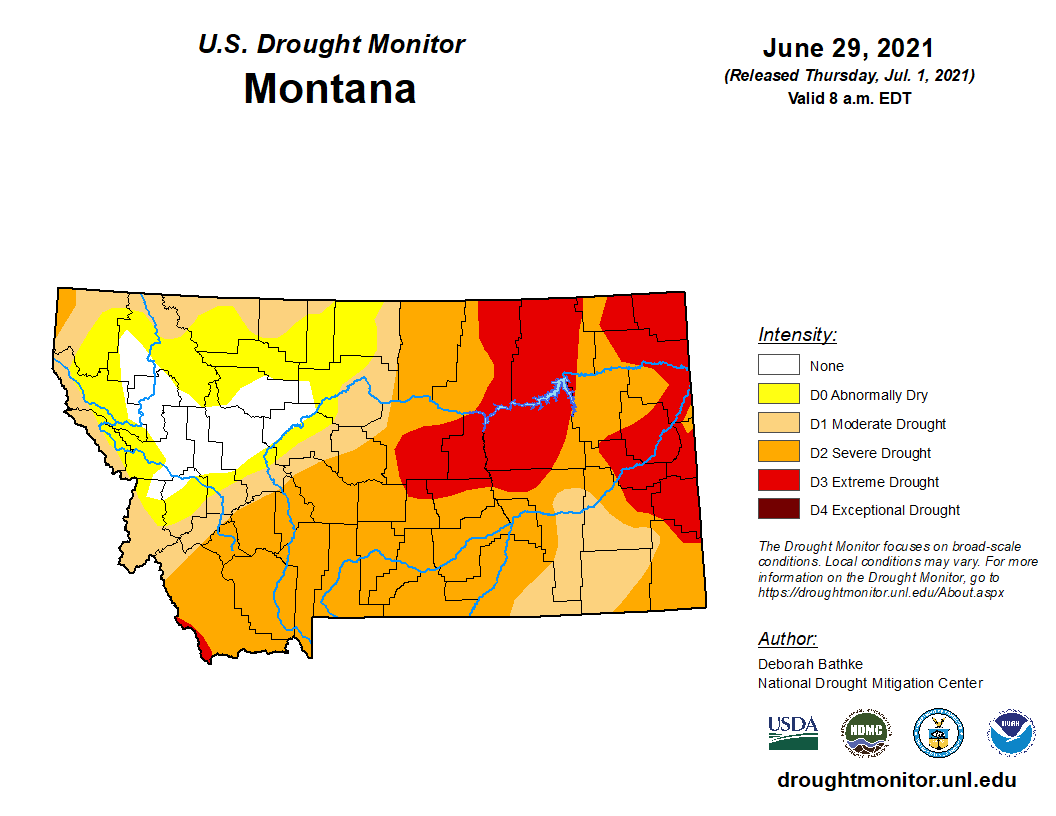 Drought conditions at this point in 2021 are substantially worse than at the same time last year when approximately 52 percent of the state confronted similar conditions.

The July forecast projects below-normal precipitation throughout the state and a 40 to 50 percent chance of above-normal temperatures across much of Montana.

The governor’s executive order declaring a statewide drought emergency is effective immediately and can be viewed here.

“As we continue to see record-breaking temperatures from Libby to Glendive, it is imperative that the U.S. Department of Agriculture aid Montana communities in accessing critical resources, such as the Livestock Forage Program, Emergency Conservation Program, and Emergency Livestock Assistance Program, to respond to continued severe drought conditions on the ground,” the governor wrote in a letter to Secretary Vilsack.

With many Montana ranchers in need of forage, the governor also called on Vilsack to allow for emergency haying and grazing on all of Montana’s participating Conservation Reserve Program (CRP) acreage.

“Because we expect record-breaking heat and associated drought, it is imperative that Montana can take advantage of viable acres of CRP land,” the governor wrote.

What will be his plan for hunting season? If condition do not improve substantially, it will be very dangerous and very damaging to the landscape, public and private.