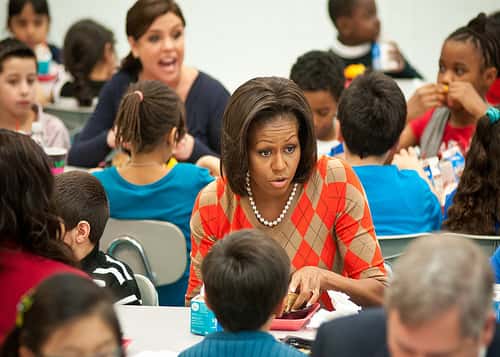 WASHINGTON (DTN) — The House Appropriations Committee on Thursday rejected a proposal to restrict benefits under the sugar program as part of a much larger agriculture appropriations bill that was dominated by school meal issues.

The committee passed the USDA and FDA annual appropriations bill by a vote of 31 to 18 following debate on a broad array of nutritional issues that even led first lady Michelle Obama to lobby lawmakers.

The committee also supported a provision to end the ban on white potatoes in the Special Supplemental Nutrition Program for Women, Infants and Children, known as WIC.

House Agriculture Appropriations Subcommittee ranking member Sam Farr, D-Calif., said the bill would face a series of problems as it moves to the House floor because it contains a provision requiring USDA to grant waivers from school meal nutrition requirements to any schools that say they have lost money in the program for six months.

“This section is a poison pill in this bill,” Farr said, adding that Democrats will oppose the bill and that when it gets to the floor it will be tied up by procedural motions.

Michelle Obama has been a strong advocate of healthier lunches. She is pushing for lawmakers to avoid any changes that would lower new healthier standards created in 2010.

The committee vote was 22 in favor and 29 against along party lines against an amendment offered by Farr to strike the waiver language, with the Democrats supporting Farr and the Republicans opposing the amendment.

Aderholt maintained that the bill doesn't roll back the standards, but gives the schools more time.

“If schools are not struggling, they don't have to change anything,” Aderholt said.

Dent, whose district includes the Hershey candy company, said sugar had been the only program in the farm bill that was not reformed.

But several committee members, including Reps. Tom Rooney, R-Fla.; Betty McCollum, D-Minn.; and Marcy Kaptur, D-Ohio, all opposed the amendment, noting that the issue had been considered in the farm bill passed earlier this year.

Kaptur said sugar producers in her region have to compete with imported sugar from countries that use “sweat labor.” Also, growing sugar, she said, “is part of the fundamental spine” of many states.

The vote on the sugar amendment was 18 in favor and 32 against.

“This was just another attempt by sugar opponents and the big candy companies they represent to harm U.S. sugar farmers, and the committee should be commended for overwhelmingly rejecting this scheme,” Phillip Hayes, a spokesman for the American Sugar Alliance, stated in a news release.

“It's hard to imagine any agricultural issue that has been voted on as many times as sugar policy in recent years, yet the votes continually show strong support for domestic producers.”

The bill contains a provision to stop USDA from enforcing certain provisions of the Packers and Stockyards Act related to poultry. Kaptur offered two amendments to change the provisions, but both went down to defeat.

The committee approved an amendment offered by Moran to ban USDA inspection of horse meat for human consumption. Horse slaughter still sparked heavy debate because the U.S. is sending an average of 2,000 horses every week to Mexico for slaughter.

DeLauro introduced an amendment to take out the subcommittee potato provision, but it was voted down by voice vote.

The committee also passed an amendment offered by Rep. Alan Nunelee, R-Miss., that would relieve vending machine operators from putting calorie counts for their products on their outside of machines, as would be required under the menu labeling requirements of the Affordable Care Act.

DeLauro spoke bitterly against the amendment, saying the requirement would allow people a chance to see the number of calories in a candy bar or other food item before purchasing, but the amendment passed on a voice vote.