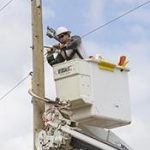 A major win for rural electric cooperatives was among the major provisions for agriculture in a massive federal spending bill that will fund the government through September of 2020. The House voted 297-120 on Tuesday to clear the $1.4 trillion bill that funds most major federal agencies with a rush to get the Senate to approve the bill before Friday to keep the government from shutting down.

The National Rural Electric Co-operative Association praised the bill for including two provisions that co-ops around the country have been pushing for all year. The RURAL Act, which ensures that co-ops that accept government grants for storm restoration or broadband are not at risk of losing their tax-exempt status.  The SECURE Act, which will lower the premiums that electric co-ops pay to the Pension Benefit Guaranty Corp. for low-risk defined benefit pension plans.

National Rural Electric Cooperative Association CEO Jim Matheson said, “This package preserves the fundamental nature of the electric cooperative business model and will save electric co-ops tens of millions of dollars each year. Moreover, it protects co-op members from unfair increases in their electric rates and provides certainty to co-ops that leverage federal and state grants for economic development, storm recovery and rural broadband deployment.”

NRECA explained, “To maintain their tax-exempt status, co-ops may receive no more than 15% of their income from non-member sources. Historically, government grants were considered contributions to capital, not income. But a glitch in the 2017 tax law inadvertently categorized grants as non-member revenue, threatening to push co-ops beyond the 15% threshold. The RURAL Act makes it clear that government grants will not threaten a co-op’s tax-exempt status.”

Matheson said the SECURE Act was important because “electric co-op pension plans pose nominal risk of default, yet co-ops continue to pay PBGC premiums as if they were Fortune 500 companies with higher risk profiles. I applaud the House for recognizing these important differences and passing this bill to save electric co-ops more than $30 million annually.”

The appropriations bill also includes an additional $1.5 billion in disaster funding pushed by Sen. John Hoeven, R-N.D., chairman of the Senate Agriculture Appropriations Committee. The $1.5 billion, which had been unspent in 2017, will be added to $3 billion passed earlier in the year. Hoeven also included language making sugarbeet losses from this year’s harvest eligible for disaster aid. The provision will also cover quality losses for those growers.

“We also added provisions to make sure that our sugar producers are included and to help cover quality, excess moisture and drought losses, which is helpful for our farmers and ranchers,” Hoeven said. “We not only have low commodity prices but unprecedented weather. The disaster assistance and advancing trade agreements will help to get our producers through this tough stretch.”

The House also included $550 million for USDA’s rural broadband expansion program, ReConnect. The House had initially approved $605 million, but the Senate did not include funds for the program. A bipartisan push from nearly 50 rural congressmen kept funding for the broadband expansion. “We’re obviously very pleased that ultimately we’re keeping ReConnect funding level at FY19 levels, allowing this important program to continue,” said Rep. Abigail Spanberger, D-Va., a member of the House Agriculture Committee.

The bill also includes $19.6 billion to add more agricultural inspectors at various ports of entry into the U.S. to curb the risks of foreign animal diseases or crop pests entering the country. The National Pork Producers Council stated the funding would reduce the risk of African swine fever showing up in the U.S.