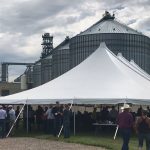 In recent years here, farmers across the region have been looking to try new and different crops as the prices of practically all our commodities are forcing folks to think outside the box. But this year, more producers turned to barley as it showed some promise to yield some profitability.

Nationally, we saw an almost 18 percent increase in barley acres, up more than 350,000. In our region specifically, farmers in Montana planted another 100,000 acres this year, making it the top barley producing state in the nation. North Dakota growers increased their barley acreage by 150,000 acres to becoming the number 2 barley growing state. And Wyoming, sitting in 7th in barley production increased their acreage by over 50 percent.

On July 11th, MillerCoors held their Barley Day in Power, Montana to celebrate the hard work of farmers in the Golden Triangle.

Check out Northern Ag Network’s Colter Brown’s report from his trip to Power and his conversation with Molson Coors Chairman Pete Coors.

Pete also told Colter that given these uncertain commodity markets more farmers are looking at barley because it presents both financial and agronomic advantages. He says their barley program is designed to do three things: “Our barley varieties have to be really good agronomically – high yielding and easy to operate, that’s really important to our growers. But they also have to malt well and of course they have to brew well. It’s exciting to see the program that we have, that continues to find ways to help all three of those aspects.

Pete Coors also talked about the changes that the brewing industry has seen in the last decade as craft brews have become more and more popular. “The industry has changed dramatically from the varieties of the beers to the sizes of the breweries.” With 9,000 breweries nationwide, it’s a fun time for consumers who enjoy different types of beers but it has changed the landscape of the industry. While MillerCoors does offer a wide variety of brands and varieties, Pete said their big products like Coors Light and Miller Lite continue to be the core of their business.

Back in February of this year, the beer industry found itself a little more in the national spotlight with Bud Light’s Super Bowl Commerical that pointed to the differences in the ingredients in different beers, more specifically in the use of corn syrup in the brewing process. It created quite the stir in the media and amongst farmers especially. Pete Coors though said they took it as an opportunity to toast the farmers that raise the barley that goes into their beer and thank them for what they do.

“It was an opportunity for us to really talk about how important our growers are on a bigger scale,” Coors said. “Wouldn’t have asked for that opportunity really, but having it has been fun to have an opportunity to tell our growers how much we really appreciate what they do for us. Obviously we can’t brew great beer without great farmers.”