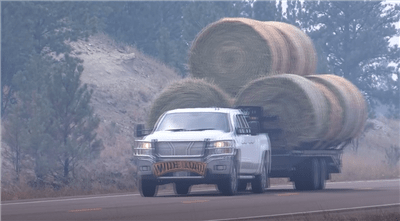 Where are we going to find hay this year? That’s a question that far too many ranchers in Montana are asking themselves as the historic drought has severely limited hay production, therefore doubling in price. One Montana rancher is examining the feasibility of importing hay from other states.

Dooling estimates that given the widespread effects of the drought, up to 40% of the cows in Montana could be liquidated in the coming months. “I’m thinking that’s 400,000 head of cattle that are going to have to leave the state and what are we going to do…. That’s 4 billion dollars that’s going to leave the economy and there are a lot of big issues out there if we lose that many head of cattle.”

To combat the problem, Dooling is working to bring hay in from other states such as Tennessee via railway. With additional moisture and a longer growing season in the Southeast, hay producers are able to get 4 to 5 cuttings of hay meaning a surplus of forage in that region.

Dooling said, “The rule of thumb I always use is that if it’s not raining here, it’s raining somewhere. The guy I sell to in Tennessee, he was telling me how much hay they have there and it’s piling up everywhere.”

Originally, Dooling examined shipping the hay by rail as large round bales, however logistical issues such as train car availability, staging, loading, unloading, weeds, pests and added input costs have forced him to find other alternatives. For example, they were offered 60ft box cars but the box cars could only hold 30 tons each.

One idea some are considering is shifting to a cake or pelletized form which would answer many of the questions and issues raised with the large bales. The pellets are weed and pest free, and allows for more flexibility in terms of transporting. One of the added advantages of a pellet form is the ability to unload in more locations across the state.

Dooling said having the hay in cake form allows more options for producers such as feeding with straw to help push cattle through the winter. “We can put cotton meal in there and other additives to bring the protein up and get to where it’s a good mix.”

Currently, Dooling is searching for a facility that can handle the large amount of hay that is needed by ranchers in Montana and he’s seeking help to overcome this issue.

Dooling mentioned, “We’re trying to find someone to pelletize this much hay, so if you know someone that would help that would be great…. We’re realizing this problem is getting bigger and we need to solve it soon because some people are already on their fall pastures and will be feeding in October.”

With the help of other Organizations such as Montana Stockgrowers, Montana Farm Bureau, Tennessee Farm Bureau and Tennessee Stockmen, Dooling believes that this problem will be solved.

“The good news is we know where the feed is and we have a lot of smart people starting to get on this, and I’m confident that we will figure this out.”

Use Caution When Feeding or Grazing Weeds in Extreme Drought

Daines and Thune Take Democrats to Task Over Stepped-Up Basis

Good ideas. Having any success?