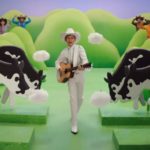 A new campaign by Burger King is garnering criticism from ranchers across the country. This week, Burger King launched a new effort to improve the environmental impact of beef. The campaign called #CowsMenu focuses on the fast food company’s plans to reduce methane emissions from cows.

In the video, released on social media on July 14, Burger King has a kid singing about how cow emissions (burps and farts) are causing global warming. According to Burger King, “Cattle are one of the top contributors to overall greenhouse gas emissions. Since we are part of the problem, we have been working to be part of the solution.”

After a year of research, the video says scientists developed a feed the improves cows’ digestion and reduces their methane emissions. By feeding cattle a diet with 100 grams of lemongrass, the company says they can reduce emissions from cattle by one-third.

The entire campaign has unsurprisingly been met by criticism, doubt and eye-rolls by farmers and ranchers. National Cattlemen’s Beef Association CEO Colin Woodall responded saying, “Members of NCBA are disappointed by the release of Burger King’s #CowsMenu campaign. The nation’s burger restaurants can, and many of them do, play a vital role in helping improve beef’s sustainability and reducing its environmental footprint.”

“Unfortunately, Burger King has chosen a different path, relying on kitschy imagery that misrepresents basic bovine biology – cattle emissions come from burps, not farts – and on the potential impact of a single ruminant nutrition study that was so small and poorly conceived, it was dismissed by many leading NGOs and beef industry experts.”

“The U.S. is already a leader in sustainable beef production. The EPA attributes just 2 percent of greenhouse gas emissions to the American cattle industry, and yet cattle farmers and ranchers remain committed to continuous improvement and producing beef more sustainably.”

“America’s cattle producers are disappointed that Burger King has decided to follow a path that is misaligned with those who are already making real-world efforts to reduce beef’s environmental footprint, opting instead to score easy points with consumers by launching a misleading public relations campaign.”

University of California-Davis professor Dr. Frank Mitloehner, one of the world’s leading experts on livestock emissions, says that livestock production in U.S. accounts for 3 percent of greenhouse gas emissions, whereas transportation accounts for 26 percent.

In an interview with Farm Journal, Mitloehner said that two studies have been conducted on feeding lemongrass to cattle, but results have thus far been inconclusive. He called Burger King’s promotion of lemongrass as a tool to reduce emissions “premature.”