New Proposal to Assist with the Backlog of Fed Cattle

A new proposal is circulating amongst cattle producers and lawmakers in Washington to create a program to fund placing cattle on a maintenance diet while the industry waits for slaughter capacity to return to normal. The Fed Cattle Set-Aside Program is modeled after a similar program that was implemented in Canada following the BSE crisis.

The program was developed by Beef Alliance, a coalition of large commercial cattle feeders from across the country. With members like AgriBeef, Cactus Feeders, Five Rivers Cattle Feeding and Friona Industries, Beef Alliance is estimated to represent roughly 25% of the total U.S. fed cattle inventory.

By placing feedlot cattle on a maintenance diet for 75 days, the Fed Cattle Set-Aside Program, would try to alleviate the risk of even greater economic collapse in the beef industry. The program was developed with the help of CattleFax utilizing USDA data.

With cattle harvest estimated at 30 to 40% below 2019’s levels, the beef industry is facing an unprecedented challenge that will take time to work through. Analysts are estimating that for 5 weeks now, 150,000 to 250,000 head of cattle are carried forward. The backlog of fed cattle is now estimated to be closing in on a million head. 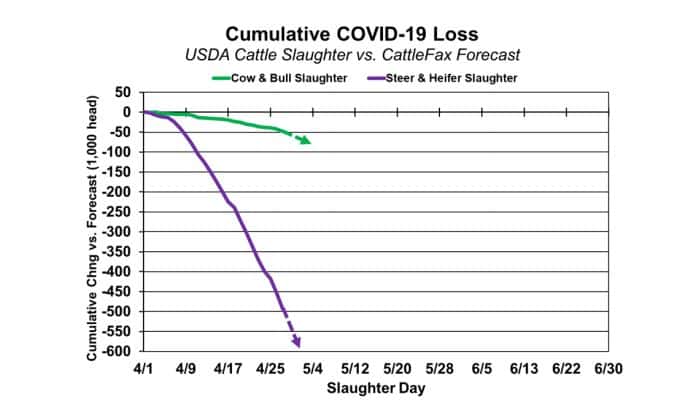 The backlog is occurring as the beef industry approaches the normal seasonal peak in fed cattle marketings.  This growing backlog is further exacerbating a dire imbalance of market-ready animals and processing capacity. Feeder cattle supplies are backing up as well. The May 1 inventory of feeder cattle outside of feedyards was the largest it’s been in a decade, with a million more head than last year.

Under the guidelines of the program, an advisory committee would be developed to make weekly recommendations on the number of animals to take into the 75 day program and the number of cattle which may be released early from the program. The proposed payment rate for cattle in the program would be $2.90/head/day. That amount is intended to offset the additional costs incurred by holding cattle back from slaughter.

“This program will give the industry a voluntary tool that will reduce the immediate pressure to harvest fed cattle until beef processors are operating at sufficient capacities to harvest them,” the proposal reads. “It will also ensure food security – namely high-quality protein – for consumers. While the concept is simple, the impact will be significant. The Fed Cattle Set-Aside Program will prevent enormous downward pressure on the entire beef supply chain.”

“This program is not intended to allow producers to recoup all economic damages. It will prevent massive economic loss throughout the entire beef cattle industry caused by a total breakdown in a system that has oversupply due to removal of production capacity. The proposed set-aside program will also provide certainty and confidence in the food supply.”