Several bills affecting tax policy were introduced in Montana’s legislature last week, and on Friday one of them ran into opposition from multiple industries, including Montana Grain Growers.

Senate Bill 181 would raise taxes on out-of-state companies that sell things in Montana, but as it is currently written, it would also substantially raise taxes on a number of long-standing businesses already in the state.

Matt Jones with BNSF Railway, for instance, said their company would face an additional $9 million in taxes, which means a major cost increase in transport freight to and from Montana.

“Contrary to the intended policy of Senate Bill 181, it’s going to create a disincentive for BNSF to invest in Montana and it’s going to negatively impact the industries that depend on competitive rail transportation,” Jones said.

One of those industries is the grain industry, which is heavily dependent on rail shipping.  Alison Vergeront, Executive Vice President of the Montana Grain Growers Association, pictured here, also testified in opposition to the bill. 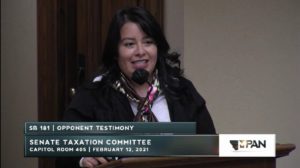 “We assure you that this tax increase sought by this legislation will increase the cost of transportation,” Vergeront said. “Higher costs for railroads directly translates to higher shipping costs.”

Telecommunications companies like AT&T and Charter shared similar concerns.  But BNSF said a simple amendment to Senate Bill 181 could maintain the existing rules for the affected industries.  They have been through this transition in many other states, they say, and those states have avoided discriminatory results and unintended consequences.

As an example, when North Dakota transitioned to a single sales factor several years ago, industries with special apportionment rules were allowed to maintain the three-factor apportionment, to better reflect their business in the state.

In his testimony, long-time legislator Bob Story, who currently heads the Montana Taxpayers Association, agreed with that approach.

“Due to the unique structure and operation of these companies,” Story explained, “the single sales factor causes significant increases in the amount of taxes that they pay in Montana.  We feel these concern can be mitigated in this bill, and we would ask this committee, the sponsor, and the executive branch to work together to address these concerns.”

There is no word yet on possible Senate Tax Committee amendments to Senate Bill 181.