During a bout of severe fire weather in early September, the Sarpy fire burned 52,000 acres in Big Horn and Rosebud Counties. The cause of the fire was determined to be an underground burning coal seam in the Northeast corner of the Crow Reservation. High winds and extremely dry conditions allowed the fire to travel 15 miles in just 5 hours.

Now the ranch families in the area are trying to pick up the pieces of their operations and put them back together. For many the damage is overwhelming.

Matt Noyes, who ranches on Tullock Creek, told Northern Ag Network’s Colter Brown about the devastation witnessed by ranchers. “We’ve got producers who have lost cattle, we’ve got close to 80 miles of fence that’s totally lost, and we were already short of grass after getting hit hard by grasshoppers.”

Badly needed haystacks and equipment were also lost in the fire. “It was pretty devastating,” Noyes said. “In the aftermath, one ranch lost up to 60 pairs and another one was like 70 pairs. And cattle are scattered everywhere, so we won’t know the total devastation of it until all the neighbors get everything gathered.”

Community members like Noyes are stepping up though to help producers get back on their feet. One of the first things they are working on is fencing and with the cost to rebuild, Noyes says they could sure use some help.

“If you look at what it costs to build a mile of fence, it’s close to $4,000,” he says. “That’s just in materials alone. So if we can get donations, if anyone is willing to donate fencing material, whatever we can get to help these people out.”

To help build awareness and raise some money a range roping is being organized at the Noyes ranch, scheduled for October 18th. “What we’re doing is a pasture roping,” Noyes explains. “It’s out on the grass, back them into a box, give a 50 foot score line and call for your cattle. Just a regular team roping, but it’s out on the grass. We’ll have concessions there and after we get done with the roping, we’ve got Exit 53 playing music. So it’ll be right there on the ranch, just having fun for the day.”

The cost to compete in the range roping is $50 per team and teams can enter up to 4 times. There will be both an adult and youth division. Noyes said he hopes to have 200 teams competing.

Also, to help with the recovery, an account has been set up at First Interstate Bank in Hardin to accept cash donations and there is a donation page on the Rancher’s Relief Range Roping Facebook page.

To send monetary donations to help those affected producers, checks should be made out to Sarpy Fire Relief Fund and sent to First Interstate Bank, PO BOX 903, Hardin, MT 59034. 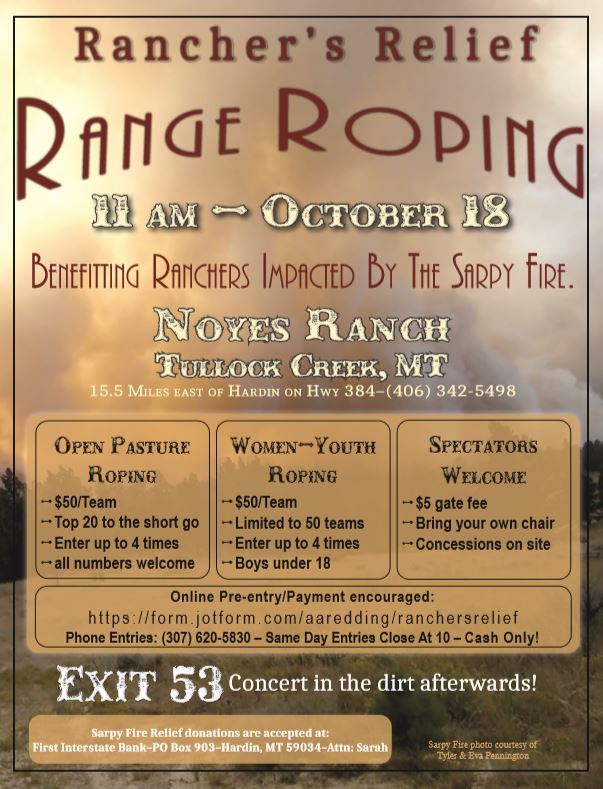 One of the hardest things about a disaster like this, is that ranch people have such a hard time accepting any help, or even admitting how badly they were impacted. How many ranches lost cattle in the Sarpy fire? I have heard that some like Kirby Walborn probably lost several dozen cows and calves. Plus don’t forget that there are often cows that are seriously burned, that will now have to be sold or shot. How about hay? And tractors? Those of us that have been through stuff like this ourselves will never forget those of you who stepped up to help. Let’s all engage here!

I was there the day after when they were looking for cattle, one of the first bunches of dead burned cattle was my brother Shawns, there were 117 dead cattle in that bunch, not long after that they found 200 burned and dead that were kirbys. Both guys had to ship calves more than a month early and find other grass or feed for the remaining cattle. It was a catastrophic fire for them both…

Who would we contact for a church group to come help do some fencing?

Being from a ranch that lost little, to neighboring the ranches who lost a lot is hard to say the least. You do what you can to help, but in the end there is really no fathomable why to understand the losses. The hours spent fighting the fire, the gratefulness to neighbors and friends who came to help with the fire, but in the end, grass was still lost, miles of fence destroyed, cattle burned to death, multiple hay stacks in ashes, a tractor lost, figuring out what to do with the cattle you do find alive and doctoring them, and the list goes on.

The toll it takes physically and emotionally is exhausting. One thing we can continue to do though is be there for each other and that is what we are doing. Ranchers are a resilient breed we say and we will get the pieces put back together with each other’s help. Thank you to Matt and Sarah Noyes for starting this fundraising event and to everybody who has already donated to the cause and anybody who is willing to, for we are in this together. God Bless. -Molly