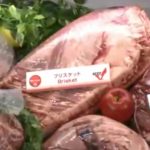 Two members of the North Dakota Beef Commission traveled to Japan last week as part of a U.S. Meat Export Federation trip to promote U.S. beef. Past Chairman Clark Price of Washburn, N.D., and Vice Chairman Mark Voll from Sidney, MT made the trek and called in to the Northern Ag Network to give us an update while they were in Japan.

U.S. beef has had two significant victories in Japan this year. The first came in May, when Japanese officials announced that they were lifting the 30-month age restriction on U.S. beef, a regulation that had been in effect since 2003. Every rancher remembers the “cow that stole Christmas” and the resulting marketing impacts that came from the BSE scare.

Then just last month, the Trump Administration announced a trade agreement in principle with Japan. The agreement will put U.S. beef on a level playing field with those countries that are currently part of the Comprehensive and Progressive Agreement for Trans-Pacific Partnership. Those countries currently hold a tariff advantage over U.S. beef that puts American ranchers top export market in jeopardy.

“The 30 month and over news is a big advantage for U.S. producers because now we’re able to send over some variety meats from those cows that are 30 months and older,” said Clark Price. “Now that we have the opportunity with the trade agreement in concept, that says we’re going to be on a level playing field as the rest of the trade partners with Japan, we fully expect to grow this market very substantially. Right now, we’re at a disadvantage of about 12% on tariffs coming in to Japan and we’ve managed to hold steady in that market.”

The Trump Administration has indicated that they hope to have an agreement with Japan signed this month. Mark Voll said there’s a lot of speculation around the timing, but they’re hopeful it will be soon. “From a conservative perspective, we’re certainly hoping to have something in place by the first of the year,” Voll said. “We did have a large gathering of beef purveyors, packers and meat purchasers and they’re a little more confident that something will be done earlier than that. It certainly has everybody’s attention and they really want to get something done.”

The top competitor for U.S. beef in the Japanese market is Australia. However, continued drought in Australia and the resulting reduction in their beef herd, calls in to question how much beef they’ll be able to supply to foreign markets. Also, the beef supplied by Australia is predominantly grass-fed and Japanese consumers tend to prefer corn-fed beef that more closely resembles their domestic wagyu beef. The challenge for the average consumer is that wagyu is very expensive, so Clark Price says, that puts U.S. beef in a really good position. “They’re really looking for American beef that is choice or better and it’s way more affordable,” Price says. “So, once we get the tariffs down, we think we can grow this market substantially.”

The North Dakota Beef Commission has seen the need to promote beef in foreign markets to reach more consumers. Mark Voll said programs like the beef checkoff help leverage the producer investment to assist with that promotion overseas. That’s why North Dakota producers chose to add a second dollar per head to the state beef checkoff four years ago to allow them to take part in efforts to build our much-needed export markets.

“The North Dakota Beef Commission is invested in the U.S. Meat Export Federation and its key to producers in North Dakota and Montana to not only maintain exports but we have to grow this export business,” Voll says. “When 96% of the population lives outside of the United States, that’s where our potential is as far as creating additional demand. These kind of trade missions are very, very, important to helping grow that business.”