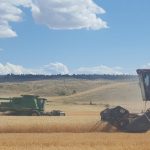 Farmers may be receiving a second round of Coronavirus Food Assistance Program (CFAP) payments sometime after Labor Day, U.S. Secretary of Agriculture Sonny Perdue said during a news conference Wednesday. USDA has about $14 billion available from funds allocated by Congress to the Commodity Credit Corp. starting in July.

In a briefing with reporters, Perdue was asked about how USDA would be utilizing the additional $14 billion in authority available to the agency under the Commodity Credit Corporation (CCC).

The additional CCC monies “will be used in the CFAP 2,” Perdue said, echoing comments he made earlier this month that a second round of the program was on tap.

USDA will continue taking applications on the first CFAP round of funding until Sept. 11th.  As of Aug. 24, USDA said it had distributed about $9 billion in CFAP payments to more than 500,000 producers.

While there has been pressure on USDA for the dates it used to determine payments under the initial CFAP effort, Perdue suggested one reason for the April 15 cutoff was “to get money out quickly.”

He said USDA is looking at the cutoff going forward and also highlighted moves by the department to cover more commodities under the program and the recent decision issue the final 20% payments to producers under the initial CFAP effort.