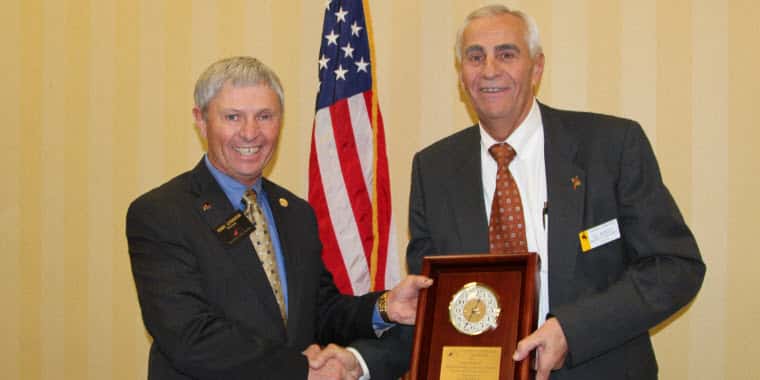 CHEYENNE–Senator Eli Bebout, of Fremont County, was awarded the 2015 Wyoming Farm Bureau Distinguished Service Award at the Wyoming Farm Bureau Federation (WyFB) Legislative Meeting.  Presented Feb. 25, 2016, the award is given to those who have gone above and beyond in their service to agriculture.

“Legislator, exemplary businessman, veteran and philanthropist are just a few of the roles Wyoming Senator Eli Bebout plays in the state of Wyoming,” said WyFB President Perry Livingston.  “Senator Bebout has made, and continues to make, great contributions to agriculture and our great state of Wyoming through his many years of service.”

According to Bebout, it is an honor to represent the agriculture community.  “I look back at my four years on the agriculture committee and the issues we worked on and the reason it works is because of people like you out there that work so hard and fight so hard for our state and your own families and come to us with issues of importance,” He told Farm Bureau members.

Senator Bebout served in the Wyoming House of Representatives from 1987-2002.  He held many different leadership positions in the House including Speaker of the House.  He was elected to the Senate in 2007 where he continues to serve as a Wyoming State Senator and is currently the Senate Majority Floor Leader.

Senator Bebout and his wife, Lorraine, have four children.  He graduated from the University of Wyoming with a degree in engineering.  He served in the Air Force Reserve during the Vietnam War.  Bebout owns a water, oil and natural gas drilling company; a construction company and a farm/ranch.

“It has been a great pleasure to represent agriculture,” Senator Bebout said.  “If you are crazy enough to be in politics, then Wyoming is the place to do it and it is really all about public service.”

“I listen to that list of things I am doing and wonder how I get it all done and the reason I get it done is because of the type of people that run and serve the state in our legislature and other elected offices.” He continued.

Senator Bebout challenged the audience to be involved in electing strong candidates for the legislature.  “One of the concerns I have not only for our country but for our state is the rural area is getting smaller and smaller and the urban area is growing and growing,” He concluded.  “We as the rural area need to recruit and elect good, strong candidates to come down to Cheyenne and represent you well.”

“The Wyoming Farm Bureau Federation is proud to honor Senator Eli Bebout with the 2015 Distinguished Service Award,” Livingston concluded.  “We thank Eli for his distinguished leadership and service to agriculture and Wyoming.”