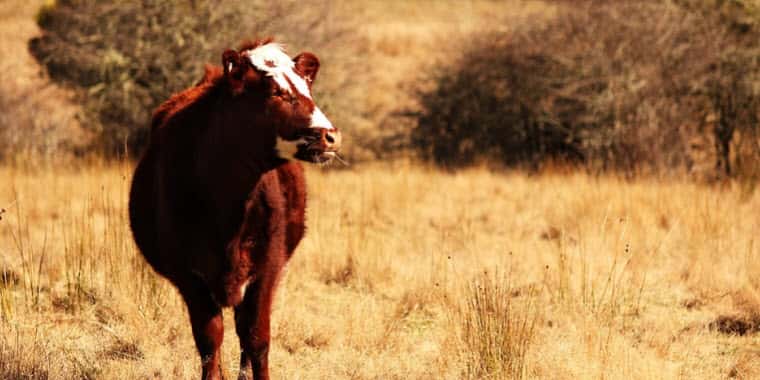 Not quite halfway through the year, 2021 is already very difficult as much of the country struggles with exceptional drought. The drought is especially hard for the many livestock producers who faced a tough 2020 due to COVID-19. Pasture and range conditions are starting the summer season off in a bad spot and unless most of the country sees much-needed moisture, it will only get worse.

Drought classifications range from D0, or abnormally dry, to D4, exceptional drought. Figure 1 shows how virtually all of the Western U.S. is experiencing some level of drought conditions, with D4 and D3 drought areas covering a greater share of the land. Many of the areas experiencing drought are key areas for grazing livestock.

Also very striking is how the drought has worsened over the previous year. There were slight adjustments in the overall levels of D0-D2 drought over the past year, but most of the change has been in the addition of the more severe categories. The area of D3 drought expanded considerably in September and October 2020, while the expansion of D4 drought kicked in in November and December.

Figure 3 shows the divergence of 2021’s national crop and condition ratings from the last few years, as well as the five-year average. Each of the first three weeks of this year set records in terms of pastureland ratings in both the good-to-excellent categories and the poor-to-very-poor categories, and not the good kind of record. The most recent data has only 25% of pastureland in the U.S. rated as good-to-excellent, which is less than half of the five-year average of 56%, and below last year’s 48%. This is the worst start to the grazing season on record, with the historical data starting in 1995. Prior to this year, the record was set in 2013, when the drought significantly impacted ranchers’ ability to graze, leading to contractions in the cattle herd. When looking at the poor-to-very-poor category, we see a similarly bleak story, with 43% of the U.S. pastureland in this category. With historical data going back to 1995, the previous record was set in 2013. Figure 3 presents the stark contrast between the start of this year and the start of previous years, with 2021 entering the charts at completely different levels.

Keep in mind, these are national numbers and conditions often vary by state. Regional differences in precipitation and temperature have led the Western states and portions of the Northeast to experience lower good-to-excellent conditions than other areas of the country.

On the opposite end of the spectrum are poor-to-very poor conditions. The regional distribution for this category largely follows the good-to-excellent ratings, with poor conditions concentrated in the Western U.S., as well as the Northeast. Arizona has the worst conditions in the continental U.S., registering nearly 90% of pasture and rangeland at poor-to-very-poor, with North Dakota and Utah close behind at 75% and 71%, respectively.

As drought has spread throughout much of the Western and Southwestern part of the country, pasture and rangeland conditions have suffered. Critical cattle-producing states are experiencing a drastic increase in the amount of pasture and rangeland in their states rated as poor-to-very-poor, while the share of pasture and rangeland rated as good-to-excellent has decreased in much of the rest of the country. The percentage of acres rated good-to-excellent has started at a record low 25% nationally, while the percentage of acres rated poor-to-very-poor has started at a record high of 43%.