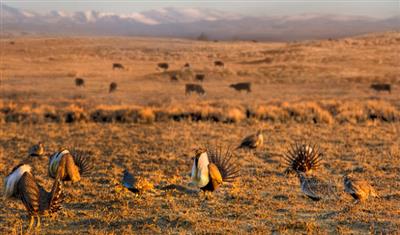 The American Sheep Industry Association, the National Cattlemen’s Beef Association, the Public Lands Council and dozens of state livestock associations came together this week in a letter of support for Senator John Barrasso, of Wyoming, and his legislation – S.4589, the Endangered Species Act Amendments of 2020.

“Your bill represents a long-awaited step forward in restoring common sense to species conservation that will ultimately restore the effectiveness of the ESA,” read the letter. “As groups who represent hundreds of thousands of livestock producers and land managers across this country, we offer our support to your legislative effort.

“Collectively, we previously offered commentary on your discussion draft in 2018 and have remained supportive of the concepts contained in the bill you ultimately introduced. Each provision in this bill addresses a key failure of the ESA that compromises species recovery efforts. As producers whose primary livelihoods are based on healthy ecosystems that sustain our livestock and our communities, we support the intentions of the ESA, despite its failings at multiple levels over the last several decades.

“S.4589 recognizes that ranchers are intimately engaged in proactive, voluntary conservation efforts that benefit species – both those imperiled and with thriving populations – far before any federal authority seeks to require additional regulatory protections. These voluntary conservation efforts are time- and labor-intensive activities that ranchers seek out for the benefit of the habitats they manage and should be recognized for the conservation value they add.

“Equally, federal authorities should be able to consider the full scope of on-the-ground conservation activities when evaluating potential protections under the act, so they are best able to consider all factors when directing resources to the most beneficial use. The ESA is too often punitive and unduly burdensome for America’s ranching community, so this provision is a key improvement of the most recent bill.”