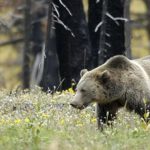 U.S. Senator John Barrasso (R-WY) and chairman of the EPW, said “The Grizzly Bear State Management Act delists the grizzly bear in the Greater Yellowstone Ecosystem from the list of ‘threatened’ species under the Endangered Species Act.” Barrasso added, “It directs the secretary of the Interior to re-issue the final rule delisting the grizzly bear that was published on June 30, 2017 and protects the re-issuance of that final rule from judicial review.”

“The grizzly bear in the Greater Yellowstone Ecosystem is fully recovered. End of story.” said Barrasso who was one of four cosponsors of the bill, including Senator Daines (R-MT), Mike Crapo and James Risch, both (R-ID). U.S. Senator Mike Enzi (R-WY) introduced the bill in February of 2019.

In September 2018, a federal judge in Montana ruled to put the grizzly bear back on the endangered species list. The state of Wyoming appealed the decision, and in July 2020 a federal appeals court in San Francisco upheld the continued protections for the grizzly bear.

“Today the Committee heard what ranchers across the West have known for years: grizzly bear populations are flourishing, which means the species no longer needs protection under the Endangered Species Act. Grizzly bear recovery is a conservation win, and returning bears to state management should be celebrated as a measure of success. Time after time, we have seen the Department of the Interior move to delist grizzly bears and be foiled by activist judges prioritizing opinion over science and undermining states’ successful management of thousands of wildlife species under their purview. Thank you to Senator Enzi and the EPW Committee for reaffirming what Interior officials have said for years – it’s time the grizzly bears are delisted.”