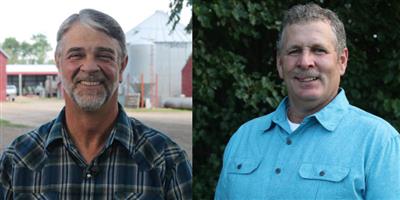 DES MOINES, Iowa, Sept. 1, 2016 /PRNewswire/ — The National Pork Board has announced the four finalists who are vying to become 2016 America's Pig Farmer of the YearSM. The program honors a U.S. pig farmer each year who excels at raising pigs using the We CareSM ethical principles and is committed to sharing his or her farming story with the American public.

“The four finalists represent the diversity of the pork industry in the United States,” said National Pork Board President Jan Archer, a pig farmer from Goldsboro, North Carolina. “They exemplify the best in pig farming and in taking the lead on environmental sustainability, animal welfare and continuous improvement.

The four finalists are meeting today with an expert panel of third-party judges in Chicago. The judges will view videos produced at the finalists' farms and will interview each of them.

From Sept. 1 through Sept. 10, the public can vote once a day per person per email address for their favorite finalist at www.americaspigfarmer.com. The winner will be announced Oct. 11.

Jarrod Bakker – Dike, Iowa Download Photo
Raising pigs has been a life-long passion for Jarrod Bakker, who grew up on a farrow-to-finish pig farm. Bakker, along with his brother, Jordan, and wife, Shari, owns Bakker Bros. Genetics. The 50-sow farm markets 1,000 pigs annually. Bakker also works for Fast Genetics, where he sells breeding stock to farmers across the country.

Brad Greenway – Mitchell, South Dakota Download Photo
Focusing on doing what's right has been Brad Greenway's goal in raising pigs for the past 40 years on his family farm. Greenway and his wife Peggy own two 2,400-head, modern wean-to-finish pig barns. They also have a cow-calf operation and raise corn, soybeans, wheat and alfalfa. The Greenways are also part owners in a 4,000-head sow farm where they source their pigs.

Maria Mauer – Greensburg, Indiana Download Photo
Providing sows with a clean, comfortable environment is step No. 1 for Maria Mauer at Smiley Brothers, Inc. Marketing 18,000 pigs per year, Smiley Brothers is a farrow-to-finish operation. Mauer also believes in the importance in teaching her five-year old son life lessons by bringing him to the barn with her to care for the sows.

About the Expert Judging Panel

The National Pork Board created the America's Pig Farmer of the Year program to recognize the best in pig farming. This honor will be awarded annually to the pig farmer who demonstrates and lives by the We Care ethical principles.

The National Pork Board has responsibility for Checkoff-funded research, promotion and consumer information projects and for communicating with pork producers and the public. Through a legislative national Pork Checkoff, pork producers invest $0.40 for each $100 value of hogs sold. Importers of pork products contribute a like amount, based on a formula. The Pork Checkoff funds national and state programs in advertising, consumer information, retail and foodservice marketing, export market promotion, production improvement, science and technology, swine health, pork safety and sustainability and environmental management. For information on Checkoff-funded programs, pork producers can call the Pork Checkoff Service Center at (800) 456-7675 or check the Internet at www.pork.org.