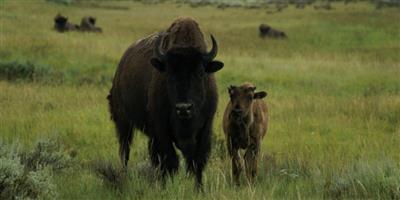 University and Bison Groups to Advance Research for Industry

RAPID CITY, SD – The future of America’s national mammal continued to brighten this week as officials from South Dakota State University (SDSU), the National Bison Association and the National Buffalo Foundation formally launched the Center of Excellence for Bison Studies, to be headquartered at SDSU’s West River Research and Extension facility in Rapid City, South Dakota.

The 2018 Farm Bill authorizes the USDA’s National Institute for Food and Agriculture to recognize centers of excellence in research, extension and education in the food and agricultural sciences. The Center of Excellence for Bison Studies will be coordinated through SDSU, but will include active participation by researchers and extension officials from other land grant universities, including 1994 tribal land grant colleges and universities.

The Center will focus on research activities to improve bison herd health and production and the economic viability of both private and tribal bison producers.

Plans for the Center of Excellence began in May 2017 when leaders of the National Buffalo Foundation, the National Bison Association’s Science and Research Committee and Sinte Gleska University convened with SDSU researchers at the main campus in Brookings, South Dakota. Participants at the session agreed on a number of research priorities, but recognized that a coordinated effort was needed to generate the resources to underwrite those initiatives.

The National Bison Association’s executive director Dave Carter told the Northern Ag Network the group is excited about the launch of the Center of Excellence for Bison Studies. Carter said, “We have struggled through the years because we don’t have the infrastructure, the institutional knowledge on bison health. For years and years the health issues have been developed by the producers in the field through trial and error and thank goodness to some veterinarians who have been dedicated to try and advance it.” According to the press release, Carter also mentioned the Center of Excellence will bring together academicians, ranchers, and Tribal bison managers in a collaborative commitment to help us be better stewards of our herds.

The newly installed Director for the Center of Excellence Dr. Kristi Cammack said,“We will be pulling together the leading experts in their fields to help us gain a better understanding of this animal and the ecosystems it lives in, and to develop new resources for the people who raise bison.”

Dr. Bill Gibbons, director of the South Dakota Agricultural Experiment Station at SDSU and Associate Dean for Research, added, “We realized in that 2017 meeting that there were many un-answered questions regarding all aspects of bison, ranging from their role in the landscapes they occupy to their importance in Native American culture to their significance in agriculture. And, we recognized that there are many qualified researchers interested in taking on those projects. What was missing was a unified commitment to bring together the resources to support that research.”

Phil Baird, Provost of Sinte Gleska University in South Dakota, noted, “Bison are once again coming back to Tribal lands across the country. Being a part of the Center will help Tribal managers as they restore both cultural herds and grow Tribal nation-building herds.”

The National Bison Association’s Science and Research Committee will work closely with the Center’s leadership to identify key research and outreach priorities.

The National Buffalo Foundation, a 501(c)(3) charitable foundation dedicated to being the major trusted funding source for bison research and education, will embark upon a major fundraising campaign in the coming months to provide the resources to underwrite the Center’s initial research projects. “Having the Center of Excellence in place and with SDSU’s direct involvement, we all see a much broader view of the future of bison, while at the same time opening many fresh opportunities to expand our fundraising initiatives,” said Cecil Miskin, chair of the Foundation.

How Are Montana Farmers Feeling About the Ag Economy?