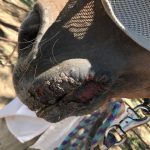 The viral disease known as Vesicular Stomatitis (VSV) which primarily affects horses, cattle, and swine could make another comeback this summer.

After becoming confirmed in late July of 2019, Wyoming was hit by VSV in 11 different counties on a total of 149 premises. The virus had first been detected in Platte county when a couple of horses developed oral lesions suggestive of VSV. After spreading throughout half of the cowboy state, the highly contagious viral disease jumped from equine into cattle.

Typically, the main symptoms of VSV are slobbering, blisters, sores and sloughing of skin in the mouth, on the tongue, on the muzzle, inside the ears and on the coronary band above the hooves. However, a major concern with this disease is that it mimics Foot and Mouth Disease (FMD), which has been eradicated in the United States since 1929. The only way to distinguish VSV from FMD in livestock is through laboratory tests.

Wyoming State Veterinarian Dr. Jim Logan says livestock owners should keep a close on their animals this summer because the southern states where VSV has already been confirmed started a month earlier this year in comparison to 2019. Dr. Logan says, “it appears the virus is spreading further to the north in those states.” The lead veterinarian for Wyoming added “VSV follows waterways such as irrigation canals and natural drainage’s, so we’re expecting to probably get it here this summer.”

The disease is naturally spread through biting insects such as deer flies, horse flies, mosquitoes, and other vectors, however, the viral disease is highly contagious and can spread by animal to animal contact. Dr. Logan suggests livestock owners to be cognizant of recommended bio-security measures to avoid your livestock becoming infected.

Some of those measures may included not sharing tack, having individual buckets and feed pans for animals, and keeping livestock “socially distanced.” Livestock owners can also reduce the spread of VSV by applying insect mitigation methods. Be sure to keep weeds and tall grass on your premises knocked down, drain any standing water that could create a breeding ground for biting insects and set out traps to eliminate those vectors.

Dr. Jim Logan is hopefully Wyoming can stay VSV free this year but knows the early arrive of the virus in some southern states could very well mean the Northern Ag country might see the return of the virus.

If your livestock is showing VSV symptoms, contact your local veterinarian as soon as possible.