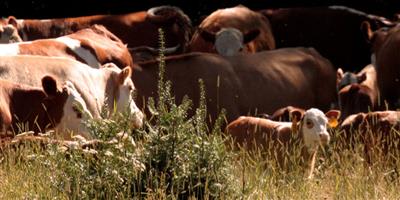 What to Know About Bovine Tuberculosis

Bovine tuberculosis is a chronic and slowly progressive disease of cattle that emerges periodically in the U.S. Its incubation time ranges from months to years. Most often, infected cattle will show little to no outward signs of infection. When clinical signs are present, they will often be vague, such as weight loss, depression, and sluggishness. Transmission of tuberculosis between animals occurs when susceptible animals are in close contact with respiratory secretions or aerosols from infected animals. Close contact is necessary for transmission; the infection is not considered to spread easily between cattle separated by any distance.

“What we see in cattle today is very different than before,” Dr. Russ Daly, professor and SDSU Extension Veterinarian, State Public Health Veterinarian told Northern Ag Network’s Leif Bakken. “We have very few cases of tuberculosis that pop up in cattle every year now. It’s a rarity rather than something that was more common and when it does show up it doesn’t show the clinical signs of outward illness in cattle that you read in history books.”

Cases of bovine tuberculosis are usually diagnosed on the basis of tell-tale abnormalities found on slaughter inspection. Tuberculosis in live cattle is identified using the caudal fold test (CFT), where a small dose of tuberculin is injected into the skin around the tail. When infected animals are identified, state and federal officials trace them back to their herd of origin and work to identify other infected herds.

There are three distinct strains of bacteria that cause tuberculosis in animals and people:

On the production side, more research needs to be done on what the subclinical effects of tuberculosis infections are in the herd.

“One thing that we do know is it is pretty rare to see it in feedlot animals. Even when we do see tuberculosis in cattle, it would be more in the older animals,” Dr. Daly explains. “Most of the time those animals are going to appear pretty health and not show signs of weight loss. The real economic effects for producers come when those infections are determined and detected in the slaughter plants and traced back to the herd of origin.”

This requires testing of the herd by federal and state veterinarians to see if any other positive animals are found and need to be removed from the herd.

Bovine tuberculosis may be considered a public health concern, since it can be transmitted to people. However, people would have to be in very close contact with infectious animals in order for transmission to occur. The general public is protected from bovine tuberculosis by the federal and state meat inspection system identifying TB in slaughtered animals. Cooking and pasteurization will kill M. bovis in meat and milk.

Mycobacterium bovis can be transmitted to wildlife, such as deer. As with people and cattle, close contact is necessary for transmission. In Michigan, white-tailed deer are considered to be significant in the epidemiology and persistence of tuberculosis. Hunters at all times have been encouraged to look for abscesses or other suspicious lesions and report unusual findings to the SD Game, Fish, & Parks Department.

Grant to Reduce Conflict Between Livestock and Predators