What’s in the 2019 Market Facilitation Program?

The USDA recently provide additional details on the second iteration of the Market Facilitation Program (MFP) to be implemented over the next year. To review, the 2018 MFP was initiated to “provide aid to assist farmers hurt by trade disruptions prompted by unjustified foreign retaliatory tariffs on their products…” The 2018 MFP payments were based on the commodity produced and the amount produced. By commodity, those payments ranged from lower rates ($0.06/lb for cotton; $0.01/bu for corn; and $0.14/bu for wheat) to much higher rates ($0.86/bu for sorghum; $1.65/bu for soybeans) depending on the degree to which each commodity price had been impacted by the trade disruption. The 2019 MFP payments are structured much differently, as per acre payment rates are established, by county.

Below is a map of the per acre payment rates: 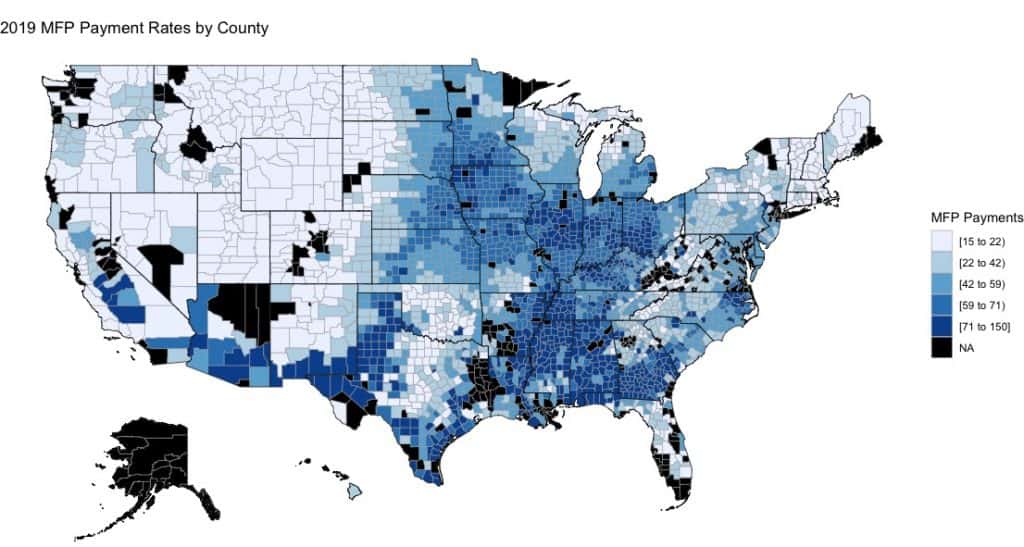 As with the 2018 MFP, payments are concentrated in the Midwest region largely due to the production of soybeans and the impact of higher tariffs on soybean exports to China. However, the payments in the 2019 MFP also appear to be concentrated in the southern cotton-growing region. This is notable given the fairly small payments to cotton farmers under the 2018 MFP. County Payment rates range from $15 to $150 per acre. In the figure below we zoom into Montana. 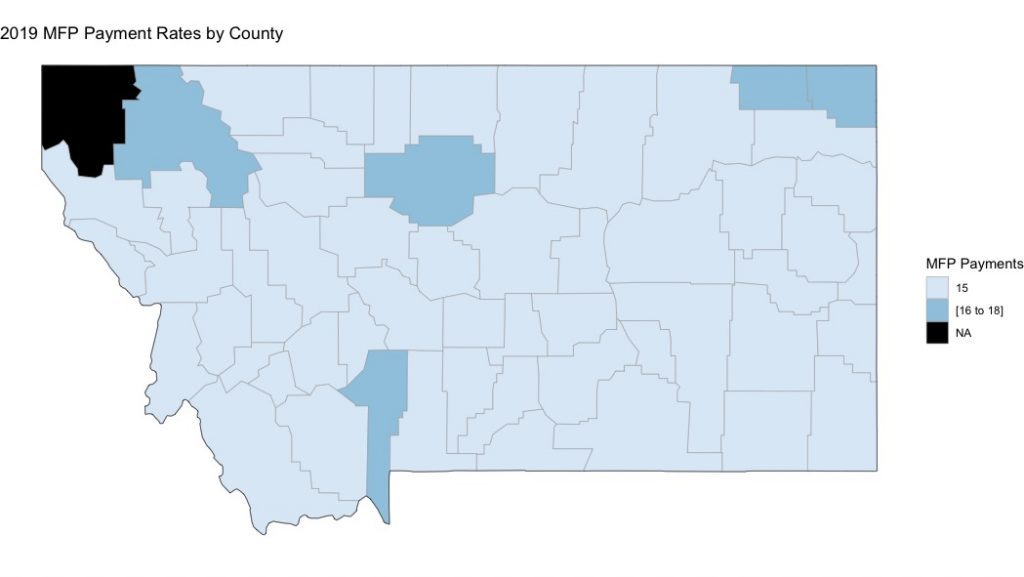 Payments in most Montana counties fall to the lowest payment rates of $15 per acre, while a few counties the rates are slightly higher: Chouteau ($16), Daniels ($17), Flathead ($16), Gallatin ($16), and Sheridan ($18). The low payment rates in Montana can be mostly explained by a relatively small wheat trade with China prior to the trade disruption.

There is a lot more financial assistance in this second round of MFP for producers in our region. To get the same level of payment or higher last year, a producer would have had to raise over a 100 bushels/acre of wheat. Plus in 2018 farmers were not paid for production of barley, pulse crops or canola.

Commodities raised in a specific county of course play a significant role in the determination of payment rates. Counties with a high percentage of cotton and sorghum production will have some of the higher per acre payment rates. The counties that are receiving the maximum per acre payment of $150 or close to it, are almost all in the Southeast in states like Alabama, Georgie, Mississippi, and Texas.

Producers can sign up for the program from now through December 6th. The FSA recommends calling your local office and scheduling a time to come and complete the paperwork, or you can download an application here.

Eric Belasco is an Associate Professor in the Department of Agricultural Economics and Economics at Montana State University. He received both his M.S. and Ph.D. in Economics from North Carolina State University in 2005 and 2007, respectively. He conducts research in the areas of agricultural marketing, risk management, farm policy, and financial engineering. Examples of this research include evaluations into grid pricing risk, the use of forward contracts in mitigating profit risk, modeling revenue risk in cattle production, and characterizing the link between weather and production indicators.