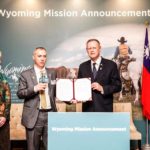 Last week, Taiwan announced they will be accepting U.S. beef that is aged more than 30 months, as well as U.S. pork containing the feed additive ractopamine. The move helps strengthen a bilateral trade agreement that has been in the works for 15 years and is viewed by some beef producers as a huge win.

Valerie Murray is one of those supporters. She is a partner at Murraymere Farms in Powell, Wyoming and was part of the first ever blockchain shipment to Taiwan last year. Murray has played an important role in advocating for beef heading to Taiwan.

In the past two years, Murray has made several trips to Taiwan to represent beef selected from her farm, which was featured in a couple of Taiwan restaurants. She was also recently recognized as the 2020, “Heart of Agriculture” woman producer honoree for Wyoming. So, to say she knows about beef heading to Taiwan is an understatement.

Murray called the recent restriction updates a huge win saying it “will allow us to feed them a little longer if needed,” adding, “there could be a higher chance to ship more primal beef” which could help provide a premium for producers. However, one thing standing in the way is packing plant capacity.

With COVID-19 temporarily shutting down many packing plants across the country this year and creating a huge backlog of cattle, a call for more regional processing plants has been voiced as a solution by many folks in the industry. Murray stands behind that theory and would like to see more meat processors who can handle traceability requests.

“Traceability for Taiwanese people is of upmost importance,” said Murray. She suggests producers who would like to ship beef overseas have a strong traceability program, “because Taiwan residents definitely want to have that traceability of farm to fork.”

Valerie added the demand is definitely present as Taipei has over 7 million people. If we can get enough producers on board with export certification and processors able to handle the traceability aspect, Taiwan could have big potential for moving higher in our export markets.

Valerie Murray also encouraged anyone interested in brainstorming ideas about beef exports to Taiwan, to send an email to murraymere@outlook.com