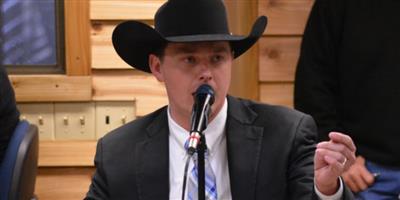 Northern Ag Network Note:  We've seen this video making the rounds on Facebook and loved the story, particularly the part about this kid learning his trade on the way home from a trip to Montana.  Even more than that, we love the work ethic these parents have instilled in their whole family who all work to make the livestock auction a success.  Be sure to check out this video, you'll be glad you did!

The following is a portion of an article by Boyd Huppert, KARE

Come Fridays, the fifth grader is front and center at the Blue Earth Stockyards, selling cows with his rapid fire delivery.

“When he gets up there he just gets in his element,” Cash's dad, Dan Owens, says. “It's pretty amazing to see.”

Cash got his first lesson in auctioneering during a drive home from Montana with his dad and a family friend, who happens to be a full-time auctioneer.

“So for 795 miles home, every fence post and rock and pickup and cow and everything else that they saw got sold,” laughs his father. “I was so ready to get out of that pickup.”

When Cash's parent's bought the stockyards last year, he was ready to take the stage.

The four other Owens children have roles of their own at the stockyards.

Seven-year-old Chase distributes cookies to the cattle buyers in the wooden bleachers, 13-year-old Cheyenne can be found on horseback driving cattle toward the sales barn and 12-year-old Cody and 15-year-old Cole take charge of sorting.

And why has Cash taken on the role of auctioneer?

“He likes to talk a lot more than us,” Cole said.

“Could never stop,” he says. “I just wanted to talk all the time.”