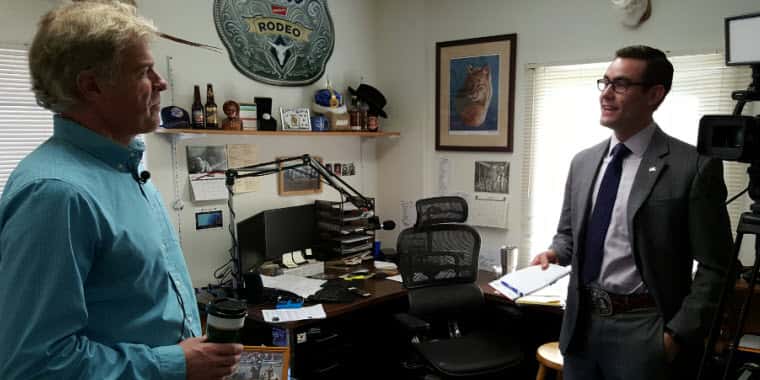 Sean Gerrity, president of the American Prairie Reserve (APR) has been working to address some of the questions and concerns that have been raised by the Bureau of Land Management (BLM) announcement on December 28, 2015 to approve grazing permit changes on the 13,000-acre  Flat Creek Allotment in Northeastern Montana.  The proposed decision would change the permit from seasonal grazing for cattle to year round grazing for 385 bison.  Also approved was the request to remove all interior fences, approximately 14.5 miles of fence, on the allotment.

To date, the BLM has received over 130 comments in regards to the grazing allotment changes. The agriculture community has been vocal in its opposition and several of the leading agriculture organizations in the state including Montana Farm Bureau Federation, Montana Stockgrowers Association, R-CALF USA have all filed formal protests against the decision.

Montana Farm Bureau (MFB) had submitted a letter voicing their opposition in April 2015 when the initial application for changes was made. According to MFB President Bob Hanson, “Our members are very concerned with the idea of and movement toward establishing a ‘wild’ bison herd in Montana. We think this decision symbolizes the BLM’s endorsement of doing just that.”

Another concern that has been raised is the potentially detrimental effect removal of the interior fences will have on the grass quality.  According to the formal protest filed by R-CALF USA, “The Proposed Decision’s authorization of the removal of interior fencing contradicts best management practices for rangeland. It is counterintuitive to expect that the favorable condition of the rangeland in the 15439 Flat Creek Allotment achieved via the implementation of interior livestock cross fencing could be sustained following the abandonment of such a beneficial best-management practice.”

In Gerrity’s words, it’s a difference of opinion.  “We have thousands of hours of data off of our satellite radio collars to prove to ourselves, before we even asked for this, that the bison rotate themselves quite nicely,” he said.  “We got the habitat you can take a look at, after all those years, and it looks terrific.  In fact, the BLM comes down and says this is some of the best we have under our jurisdiction.  And we have habitat that we just purchased that looks exactly like it. We don’t see a problem.”

The Flat Creek Allotment is not the first time the APR has requested and implemented a year round grazing program.  Several years back, they had made a similar request for year round grazing and removal of interior fences on the Sun Prairie allotment which was approved by the BLM.

“The BLM got negative comments at that time, but went ahead and approved it, and basically said we will watch and see how it goes.” Gerrity stated.  “What’s happened over all those years, they watched to see how it goes, and  it’s gone very very well.  Particularly when you go down and take a look at the public areas, the BLM areas and take a look at the quality of forage and wildlife habitat that is there since we’ve been managing it since 2005.”

“On Flat Creek, the BLM said it’s the exact same habitat, it’s a half a mile up the road,” said Garrity.  “Now APR is requesting a similar thing here to do the exact same thing that we did at the last one, so not that big of a deal.”

When asked about the APR's goals going forward, Gerrity responded,  nothing different.  He noted “It's important as we go forward to continue to build the core, keep most of the private lands into block management for public access for hunting and camping.”  He also stated that they intend to continue to build more campgrounds.

Currently the reserve consists of roughly 305,000 acres that they hope to add to again this year in 2016 with a final goal of 3.5 million acres.  So far, the APR has completed 22 land purchases and the reserve has been built with a small percentage of private land, and mostly glued together public lands, primarily BLM land.  They are well on the way of meeting their goal of 1000 bison by 2018.

“It’s important to us as we go forward that we build out the core reserve, but also simultaneously work with surrounding agriculturalists, primarily cattle ranchers, to make sure that they have the opportunity to benefit from what we are doing as well.  We admittedly are working to bring back a lot of wildlife.”

Gerrity stated that it is a goal of the APR to not just increase the bison population but all wildlife in general and understand local landowners have concerns.

“We want a lot more than exists there now and we understand that can make people nervous.   How do I live with all this wildlife when I’m trying to manage my agricultural operation?   We have an idea on how that can be done, based on travels around the world: Africa, around the Caspian Sea, around the middle east, around Indonesia.  There are a lot of best practices that we baked in to a way of operating on the Eastern Montana landscape that we think can be beneficial for everybody.”

“What’s unique about us, is that we are building a conservation herd.  In other words, we are not running it as a production herd.  A lot of herds that are for production, of course, manage differently.  They are trying to maximizing poundage on the animal before it ships.  We have no such definition of success,”  he said.

“We are at 2400 feet elevation, wide open wind swept grasslands, one of the lowest areas in Montana, and that’s where all the wildlife want to go.  That’s where they want to be, that is the best spot to be in the wintertime.”  When comparing the APR to Yellowstone Park, Gerrity said, “We are a quite a bit advantageous in that we will be a million acres bigger than Yellowstone Park, and the habitat is absolutely ideal.”

Only time will tell if these best practices identified in other parts of the world will work managing land, cattle and wildlife in Eastern Montana.