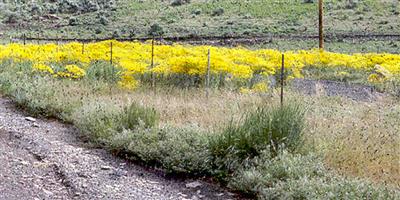 Green grass is finally being spotted out in the pastures and fields but also making their appearance are weeds.

Managing weeds is nothing new, but there may be ways producers haven’t tried. Typically, people use chemical sprays to kill off weeds and sometimes that makes it tougher to kill weeds in the future. There are some weed management tools that are easily accessible and maybe make the job more cost effective.

According to a South Dakota State University Extension article, there are four major alternative weed control options: clipping and cutting, prescribed burns, livestock, and biocontrol with insects. Clipping/cutting and prescribed burn are pretty straight forward. By cutting the plant early, it can stop seed production but may have to happen multiple times. Prescribed burns can be helpful for restoring the area and getting rid of unwanted plants but coordination is key with local fire authorities and Mother Nature.

Many producers have used livestock to manage weeds. Sheep and goats are famous for enjoying certain weeds and even cattle will eat them usually at a young stage in the plant’s life. Some producers have even turned weed grazing into extra income by helping out the neighbors who may not run livestock. Still, some of these weeds cannot be utilized because they may be toxic to animals.

Insects may not be very enticing but weeds are to them. Biocontrol insects have been used in the United States since the 1940’s and go through vigorous testing through the U.S. Department of Agriculture’s Animal Plant and Health Inspection Service (APHIS). Melissa Maggio with the Montana Biological Weed Control Coordination Project says states work in conjunction to come up with a target weed and then testing begins.

“All the testing occurs outside of North America. We typically do all that testing in Europe. Researches go to the native range of the weed and test which species is keeping the plant in check. They take those insects back to a lab setting and go through rigorous testing to make sure they are host specific to the target (weed) species.”

Maggio told Northern Ag that the testing can vary, a minimum of seven years but in some cases it can take up to 20 years. This ensures the biocontrol insect will not impact native species or beneficial grasses in the system. Once complete, the petition is submitted with APHIS ultimately making the decision to approve or decline field release.

Biocontrol insects that producers may be familiar with include the knapweed root and flower weevils, dalmatian toadflax stem weevil, Canada thistle stem weevil, and leafy spurge flea beetles. These are just some that occur in Northern Ag Network’s coverage area and are offered by Weedbusters Biocontrol LLC based in Missoula, MT. Bob Rich, owner and operator of Weedbusters Biocontrol, said biocontrol insects are a great tool because they address the noxious weeds that arrived here with no natural predator.

“There was nothing to feed on them and biocontrol just reintroduces the predator to the prey in a new country,” Rich said. “We’re tying to control the weed and reduce the density in its environment.”

The draw backs of biocontrol insects, unlike our other control mechanisms, is the lack of instant gratification. It can take multiple years for the insects to establish before land owners see the impact.

“People think that biocontrol is a silver bullet,” Maggio explains, “you put the insects out and you’re not going to have any weeds but that’s not how biocontrol functions. We go to the plant’s native range and find the insects that are keeping the plant in check in that range. They don’t eliminate that plant so there is a little bit of it but not a monoculture of it. Success from biocontrol is not eradication. Success from biocontrol alone means there is still some of that weed in the system but the native and beneficial stuff will be able to thrive.”

Other misconceptions she noted include not being able to utilizing other weed management tools with biocontrols. However, when taking the proper approach to the issue producers can use multiple tools that make sense for the land. People may also be concerned about releasing non-native species into the ecosystem but the vigorous testing process gives confidence that these insects will not attack native and beneficial plants.

The important thing to remember is not every weed control tool works for every operation or in every environment. Evaluating the land and weeds, and knowing what outcome is needed to improve the landscape, will help in choosing a weed management process.