Check for Diseases in Your Crops

Producers are preparing to hit the field and as they do the crops gets a little extra attention. While checking fields producers may notice different issues from root rot to crown rot, frost or hail damage.

Mary Burrows, PhD.,  Extension Plant Pathologist with Montana State University, says that crown rot and leaf spots seems to be the most common problems in the area, most commonly associated with no-till agriculture.

“As we have more years of no-till we get increased amounts of stubble in field and from that stubble we get crown rots and leaf spots,” Burrows says. “We’ll often see blank heads near harvest and if it turns out that it was a crown rot and there’s nothing you can do with it at that point.”

She also says it is very difficult to deal with these diseases especially those caused by fusarium because it grows on a very wide number of hosts and accumulates in the stubble.

“There aren’t very good management strategies, we don’t have many resistant varieties and we don’t have very good seed treatments so we primarily push crop rotation as a way to manage the crown rot and sometimes the leaf spot but at least we do have some foliar tools for the leaf spots.”

Many root rots infect the plant early in the season or near flowering. Infection can be favored by other stresses including herbicide injury, temperature, nutrients, moisture stress, nematodes, etc. The root mass is compromised, but the foliage looks just fine until pod fill. Since the roots cannot take up the water needed to fill the seed, head size or number of pods may be less than expected. To confirm this disease, take a shovel, dig up some plants, and if you see a discoloration of the root or crown, often with a lack of secondary roots as compared to a more healthy plant, it is likely you have root rot. Sometimes pulse crop plants will turn yellow from the bottom up, but it can’t be explained by nitrogen deficiency in the soil or other causes. Wheat and barley often have Fusarium crown rot, Take all, Common root rot, and some other crown/root rots. Most can be discriminated based on symptoms or submit a sample to the diagnostic lab.

Pulses are beginning to see issues with root rot as well. Burrows says when you dig into a pea, lentil, or chickpea field you usually will find some root discoloration, especially this time of year. The problem happens when we have a wet year and when we encounter 90 to 100 degree days, the plant gets stressed, the pathogen takes advantage of that situation and we see crops fail fairly rapidly. Crops will not perform as well, pods will not fill, and plants will turn yellow. Burrows points out that if the pulse crop is on the land for the fourth or fifth cycle, the species involved in the root rot are enhanced by repeating planting and will become a noticeable problem.

In a frost event, a key symptom is that only the tips of the heads will be white and not fill, or the whole head of all the main tillers in the field. The pattern is usually pretty uniform or associated with frost pockets in the field. Sometimes the leaf associated with (that was the youngest leaf at the time) the frost event is also damaged. Frost and hail can also cause kinking of the heads, stems, and curled awns. This can be difficult to distinguish from herbicide applications, since some herbicides can cause similar symptoms. Other cues to hail damage can include missing grain, white spots only on one side of the stem (prevailing wind side), broken stems. 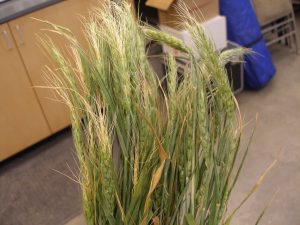 If Fusarium head blight is suspected, grain fill will be uneven, not just all at the tips of the plants or entire heads. The rachis (stem part supporting the grain) can turn brown at the infection point in very susceptible varieties. FHB in barley sometimes looks like hail damage on the heads. When put in a moist chamber (wet paper towel in a Ziploc or Tupperware), the Fusarium fungus will grow out of the heads very rapidly and appear pink/salmon colored.

If a producer suspects any of these diseases in their grains, submit a sample to a local county extension agent to help diagnose the disease and potential problem.

Update On The Tunnel Collapse