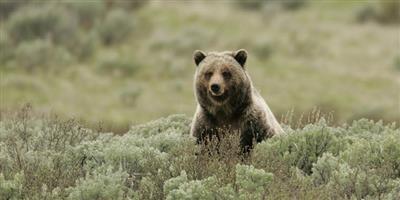 Wyoming Congresswoman and House Republican Conference Chair Liz Cheney reintroduced a bill in the House that would remove the Greater Yellowstone Ecosystem grizzly bear from the Endangered Species List.

The Grizzly Bear State Management Act directs the Interior Secretary to delist that population of bears and prevents them from being considered as threatened wildlife in the future.

The grizzly bears in the Greater Yellowstone Ecosystem (GYE) in Wyoming, Montana and Idaho have been removed and added to the endangered species list, multiple times over the past 15 years.

First removed in 2007 by the U.S. Fish and Wildlife Service, a federal judge reinstated the GYE grizzly bears in 2009. USFWS tried again in 2017 to delist the bear and a grizzly bear hunt was approved in Wyoming. However, litigation from environmental groups sent the grizzly back to the courtroom, where a U.S. District Judge in Montana once again put them back on the list.

After introducing the bill Cheney commented, “This legislation would return the management of the Grizzly to the state-level, where it belongs. The federal government or unelected judges and bureaucrats should not be in the business of telling us how to operate. The state and people of Wyoming know what’s best for Wyoming.

“The bill would also stop the abuse of the court system by environmental extremists and safeguard the scientifically proven delisting determination so that politically-motivated conservations cannot take advantage of that process.

“I was proud to work on this legislation for years with Senator Enzi and will continue to fight for it in the House of Representatives while working with my colleagues to fight for Wyoming’s statutory right to manage our wildlife,” said Cheney.

Joining Cheney in supporting the bill, Idaho Congressman Mike Simpson called the Greater Yellowstone Grizzly Bear, “one of the most well documented bear populations in the world and their numbers have grown from 136 in 1975 to over 700 today,” Simpson said. “For decades, local, state, and federal partners have worked together to revive the population of the Greater Yellowstone Grizzly Bear. This recovery effort should be viewed as a success and I am confident the state agencies are prepared to manage this population.”

“As in the case of sage grouse and gray wolf populations, Idaho has shown that the state’s wildlife experts are more than capable of successful species management,” Simpson said.

Montana Sees Over $830,000 in Grants and Loans for Value-Added Agriculture Projects