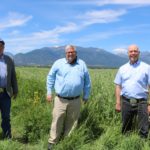 “This was such a great honor to have Under Secretary Northey and Representative Gianforte visit our family farm and talk about agriculture in Montana and in the Bitterroot Valley,” said McPherson. “We had an excellent gathering of 25 people including staff from the state and local Farm Service Agency (FSA) and NRCS, as well as a diverse cross-section of farmers and ranchers including four cattle producers, an ag bank lender, an apple farmer and two organic produce farmers”

Whether the farmers were talking about beef or apples, the most common concern was how vulnerable farmers and ranchers are to market disruptions. “We discussed problems that affect the entire food chain when there is a hiccup at any segment,” McPherson said. “For instance, when restaurants had to shut down due to COVID-19, it caused shock waves throughout the entire food industry; the same with the shutdown of beef processing plants.”

In addition to a lively roundtable discussion, the group took a tour of Bitterroot Valley where they saw how farms had successfully implemented the Environmental Quality Incentives Program (EQIP) and Conservation Stewardship Program (CSP).

“Everybody agreed that young people who want to farm or ranch need to have a way to get into it,” McPherson said. “You can’t pay development prices for real estate. You can’t pay $10,000 per acre, run a cow on it and be successful.  We talked about how the FSA programs and different types of funding can especially help young people who want to get into agriculture. It was rewarding to have this great discussion at our McPherson Family Farm with this variety of leaders who care about agriculture in Montana.”

“I think it was important to bring USDA Under Secretary Bill Northey to Stevensville to sit down with Montana ag producers and the Montana Farm Bureau to figure out ways federal programs can work better for Montana,” said Congressman Gianforte. “As Montana’s number-one industry, ag touches virtually every community in our state, and it’s critical for federal officials to hear from folks on the ground who work the land to produce our outstanding ag products.”

McPherson was also busy this week with the American Farm Bureau Federation’s Council of President’s meeting. The highlight of the meeting held via webinar was an address by President Trump. Over 3,000 Farm Bureau members were able to participate in the meeting. McPherson said the President discussed the recent trade deals with China, Japan, Canada and Mexico and the benefits that agriculture is starting to see from those agreements.

“It was a lot of good news for farmers,” McPherson said. “Farmers have had to take it on the nose with the trade disputes and getting these deals to a more level playing field. COVID has set everything back, but things are starting to move forward now, as far as purchases of ag products go. That should have a very positive effect for American farmers.”

On the Zoom call with Farm Bureau members, the President Trump also discussed steps his administration has taken for agriculture include the Market Facilitation Program payments, the Coronavirus Food Assistance Program funds and the changes to the Waters of the U.S. rule.