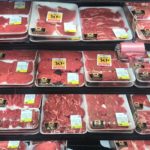 The choice boxed beef cutout has fallen 58% since it peaked at $475.39 per cwt on May 12. Recently, the cutout has been just hovering about the $200 market. On Friday, July 17th, the choice cutout slipped to its lowest level the lowest since December 2017. Both supply and demand factors are at work pushing wholesale beef prices lower.

The industry is gradually working through the backlog of cattle in feedyards. Analysts estimate that the number of cattle on feed over 150 days numbered about 950,000 head as of July 1. The means the industry reduced the backlog by about 30,000 head in June. A start, but still a long way to go.

Though summer is grilling season, the period between July 4 and Labor Day is a relatively weak beef demand period…the dog days of summer.  This period is normally a slow beef demand period for restaurants, aggravated this year by a still recovering food service sector.  Beef buying should pick up in August in preparation for Labor Day.  After all the disruption in food markets in the first half of the year it is difficult to know if markets are following normal seasonal patterns all this summer.

Longer term, beef demand may be affected by the economic recession.  Impacts have not been obvious thus far but unemployment is still high and some unemployment benefits will end this month.  With COVID-19 far from controlled, considerable uncertainty remains regarding how school schedules, sporting activities and business travel could affect beef demand this fall.

Beef production will be higher year-over-year for the remainder of the year and total pork and poultry production are also forecast to reach record levels as well.  That is likely to leave stiff competition for those consumer dollars going forward.