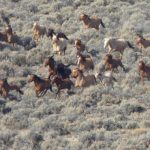 A proposal by the Bureau of Land Management to remove more than 1,700 wild horses from a herd management area in Nevada has been upheld in Federal court.

Chief Judge Beryl Howell of the U.S. District Court for the District of Columbia sided against a coalition of wild horse advocacy groups that challenged the roundup. The groups argued that the BLM chose livestock over horses that were protected by the Wild and Free Roaming Horses and Burros Act.

Judge Howell concluded that the agency did take a hard look at the environmental impact of the gather on the Caliente Complex in Nevada. Howell deemed the decision to remove the horses from the range as appropriate, both for the health of the public rangeland and the animals themselves.

“Judge Howell’s ruling affirms the Bureau of Land Management’s responsibility and authority to manage these horse herds using science and the law. Across the West, horse populations far exceed their appropriate stocking rates, often by more than three times the ideal population sizes.”

“This lawsuit sought to undermine the very tenets of the multiple use mandate. The BLM is required by law not only to manage resources for optimal land health, but also for a variety of uses for the American public. In areas where these herds reside, the BLM is required to ensure these horses do not continue to degrade water and land health simply because they are overstocked. I know I speak on behalf of ranchers when I commend Judge Howell for recognizing that this suit was nothing more than an attempt to prioritize horses at the expense of the health of our natural resources.”

As of March 1, 2019, the wild horse and burro population on public lands was estimated at more than 88,000, which is more than triple the number of animals the land can sustainably support in conjunction with other legally mandated uses.