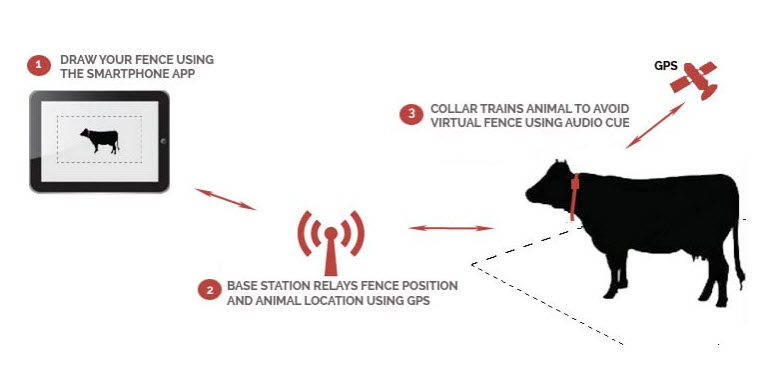 Herding Cattle Via Your Cell Phone

Satellite controlled grazing by means of a smart phone and infrared monitoring of animal health and available forage using drones is just around the corner.

Boundaries are enforced by electrical prompts meted out from transponders on individual plastic cattle collars. The signal comes from a farm base station fed by GPS tracking. Grazing zones can be enabled and controlled by an app on a smart phone, tablet or PC.

Initially, the herd is taught to recognize the invisible boundary; the process taking approximately 2 days. The animal learns to avoid crossing fence lines by an electric shock preceded by an audible signal from the transponder.

eShepherd’s satellite based technology creates the virtual fencing and, if needed, can be moved very slowly during a 24-hour period for more efficient intake of fresh forage.

Over grazing can be managed by moving animals away from select areas. This affords opportunity to increase stocking density, improve land management and ultimately improve profitability.

Agersens has worked closely with the Commonwealth Scientific and Industrial Research Organisation (CSIRO). This research body has been instrumental in developing the animal friendly software that trains cattle to stay within designated zones.

Animals lying or standing near a virtual boundary are unaffected. Cattle readying to move over fence lines receive an audible pre-warning then finite electrical stimulus to herd them back. Resting on the wrong side or heading back incurs no penalty; only moving in the wrong direction leads to action.

Ian Reilly added: “With welfare paramount we want to avoid anxiety. The transponder sound becomes associated with moving in a direction that the animal shouldn’t go.”

He added: “Animals not learning might need culling as electric shocking is finite, not continuous. But we’ve not found any yet to resist.” Another important benefit to real-time tracking is awareness of an animal’s lack of movement for long periods of time indicating possible illness or calving.

The first large-scale trial of eShepherd’s technology starts soon on a CSIRO research farm. The projected initial cost for the collar and transponder is USD $50-70 with large volume orders significantly decreasing the cost. There will also be an annual fee for database software and updates.

According to the website www.agersens.com, potential applications for the device include automating a large scale rotation grazing customize to the ranch geography, vegetation and seasonal variations, limiting livestock access to sensitive riparian areas or waterways, and getting alerts when cattle have strayed or possibly been stolen.

John Wilkes is a former UK sheep and beef producer now living in Washington DC. His experience in both the UK and US gives him a unique perspective on livestock and food production. Nowadays he writes and consults about livestock and agriculture. He also hosts a broadcast radio programme called The Whole Shebang on Heritage Radio Network from Brooklyn, New York. John is a board member of The Livestock Conservancy in the US and a member of The American Sheep Industry Association.