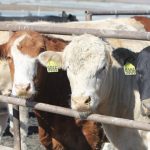 Today, U.S. Senator Jon Tester (D-MT) introduced a resolution supporting the reestablishment of a country-of-origin labeling (COOL) program. The resolution puts forth a firm statement of support for COOL, which was repealed in 2015.

Country of origin labeling are regulations that require retailers to inform customers what country certain commodities originated in, giving shoppers more information and allowing producers to compete in a more transparent marketplace.

“Our farmers and ranchers produce the best agricultural products in the world,” Tester said. “Consumers want to buy those American-made products, and country of origin labeling lets producers show their product was raised right here in America—and ensures folks can make informed choices about the food they buy.”

COOL regulations are currently in effect for several products, including chicken, lamb, goat, farm-raised and wild caught fish and shellfish, and most nuts. But in 2015, Congress repealed the law requiring the labels for beef and pork, reducing the competitive advantage for American-made beef and pork products—a decision Tester opposed. That decision has been blamed for tumbling prices and forces American producers to compete with foreign meat without any way of showing where their product came from.

Several ag groups cheered the resolution. Montana Farmers Union’s newly elected President Walter Schweitzer said he appreciated Tester’s collaborative approach to tackling the issue. “Montana Farmers Union, in collaboration with National Farmers’ Union, led the fight for COOL. We are pleased to see the commitment on the part of Senator Tester to introduce this resolution,” Schweitzer said. “Consumers deserve to know where their food comes from and they don’t appreciate being misled on the origin of beef and pork, which in turn not only hurts the consumer, but also producers. Montana family farmers received historically high prices for all of our commodities while COOL was enforced and yet consumers are paying more for a steak today than when we had COOL. Meanwhile meat packers are making record profits today at the expense of family farms and the consumer.”

The importance of a country-of-origin labeling (COOL) for beef cannot be overstated,” said Bill Bullard, CEO of R-CALF USA. “It is the only tool available to U.S. cattle farmers and ranchers to enable them to effectively compete against the growing tide of cheaper, undifferentiated beef imports in the U.S. marketplace.  R-CALF USA appreciates Senator Tester’s leadership in demonstrating the importance of establishing a national system so hard-working American cattle farmers and ranchers can distinguish their superior beef products in the U.S. marketplace.”

“Montana Cattlemen’s Association is very disappointed that President Trump did not reinstate COOL as part of the NAFTA/USMCA renegotiation,” said Jan McDonald of the Montana Cattlemen’s Association. “Passage of this resolution will make it clear that Congress supports US beef and pork producers and understands that consumers have the right to know and choose what they purchase.”

“Consumers are increasingly seeking out more information on the products they choose to feed their families,” said Leo McDonnell, Director Emeritus of the U.S. Cattlemen’s Association. “The U.S. produces the highest quality, safest, and most eco-conscious beef in the world. U.S. cattle producers deserve the opportunity to showcase their product in the retail marketplace. We’re incredibly grateful for Senator Jon Tester continuing to champion Truth in Labeling efforts through the introduction of this resolution. We ask other Senators will follow his lead and choose to stand with American consumers and ranching families.”

“Country-of-Origin Labeling supports our rural livelihoods and Ag families,” said Jeanie Alderson, a rancher from Birney, Mont. and a member of the Northern Plains Resource Council. “When we had COOL in 2014, we saw hundreds of thousands of dollars going into rural communities across Montana and bolstering our local economies as a result of higher prices. Senator Tester’s resolution works to bring back COOL to support our country’s hard working ranchers. Consumers deserve the right to know where their meat comes from, and ranchers deserve the right to an honest market.”