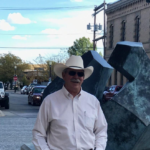 Today we salute the memory of Gordon Lee Boyer.  We lost Lee last Wednesday, April 15, at the age of 72.

Lee grew up on the Boyer family’s Lazy F Lazy 9 ranch, a homestead established by his great-grandfather in 1900, south of Bridger. A typical ranch kid, his chores included everything from baling hay, corn chopping, working cattle and sheep, feeding and butchering pigs, and probably his least favorite, cleaning the chicken house. Lee attended school in Bridger, graduating in 1965, and went on to graduate from Montana State University in 1969 with a degree in range management.

Upon his graduation from MSU, Lee would earn many awards at both the state and national level. Some of the most notable are the eight years he served as President of the Montana FFA Foundation and his Honorary State FFA degree from the National FFA Organization.

He would continue on his passion for agriculture by managing a fertilizer plant in Pierre, SD and later as a manager at a grain elevator in Shelby, MT. Lee also spent 27 years with the Montana Department of Agriculture in the Ag Development Division; managing marketing programs, ag loans, the hail insurance program, young farmer and rancher loans and more.

After a long-standing career with the Montana Department of Agriculture, Lee served as the Carbon/Stillwater County President along with being an active member of the Montana Farm Bureau Federation Board of Directors. A Farm Bureau member for over 20 years, Lee Boyer was an active volunteer leader at both the county and state level.

Lee met the love of his life, Sarah, and was married on July 7, 2007 at the family ranch. In 2013, Lee and Sarah moved to the family ranch where they remained until his passing. He was an avid reader and loved reading about history, whether it be about the history of the West or about his Scottish heritage. In 2007, he and Sarah traveled to Scotland to learn more about his family roots. He loved to travel the state of Montana while visiting family and friends and experiencing the great State of Montana.

A family service will be held at a later date. In lieu of flowers, donations in memory of Lee will be accepted at the following organizations: