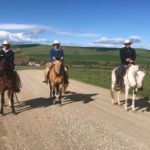 Three Montana college students will be embarking on a 500-mile pack trip, starting today, in honor of friends and family that have lost the fight to cancer and those still battling/surviving this ugly disease. Along with the honorary ride, they will be raising funds for cancer treatment and research.

Harry Green, Troy Hennes and Keagan Stroop of Belt, MT came up with the idea during Christmas of 2018. At that point, the pack trip was just a fun idea, however, Harry was mourning the loss of a family friend and beloved community member, Laurie Anderson. After a couple of long phone calls, Harry, a Pre-Med student from Carroll College, asked the group if they could dedicate the trip to a cause.

Troy and Keagan where all for the dedication trip with both having lost a family member to cancer. Keagan, a Trades Management student from MSU-Northern, felt obliged to dedicate his trip to his late great grandfather after losing his battle to cancer. Troy Hennes, also a Business Management student from Montana Tech, lost his older brother Tyler to cancer at a young of 18 in 2014. Troy is also credited for providing the motto for the trip. Ride out the grief, Ride out the pain, Ride for Hope.

And riding they will do. Their trip starts at Bannack Pass on the Montana/Idaho border and they will make their way north through several mountain ranges, including the Bob Marshall, with a final destination just northwest of Glacier National Park at the Canadian border.

The trip is planned to take roughly 45 days and will accumulate 500 miles on each one of their horses. Now if you’re thinking what I am, those are going to be some broke horses by the end of that trip, and I wouldn’t mind owning one.

Well, it just so happens the three young men will be selling about five of the horses this August at an auction with proceeds going towards cancer organizations. That auction will take place on August 29th, and guest consignments will be welcomed. The group says commission fees collected from that sale will also go directly to help those challenged with cancer.

The group is also taking contributions through a GoFundMe page as well as t-shirt sales that commemorate the excursion. You can also follow their progress on their Facebook page.

In addition to monetary support, the boys ask that you pray for the families that continue to heal from the pain that comes from losing a loved one to cancer.