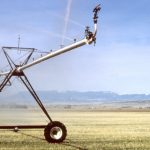 At a hearing this week, Senator Steve Daines presented his Montana Water Rights Protection Act to the members of the Senate Indian Affairs Committee. The legislation, which is co-sponsored by Senator Jon Tester, will define the federally reserved water rights of the Confederated Salish & Kootenai Tribes and settle the legal claims of the Tribes against the federal government.

The Montana Water Rights Protection Act marks a historic move towards settling the century-long dispute by providing protections for existing water users across Montana and preventing costly litigation. The legislation also invests much needed financial resources into Montana infrastructure projects and updates to the Flathead Indian Irrigation Project, which will create over 6,000 jobs in Montana.

During the hearing, Trump administration officials with the U.S. Department of the Interior cited that this legislation is the best, and least costly, path forward for Montanans, and would protect Montana’s agriculture industry against a $1.3 billion hit if the legislation is not passed.

Senator Daines kicked off the hearing by emphasizing why the bill is necessary, how it complies with the both the Constitution of the State of Montana and the U.S. Constitution, and how it’s the right thing to do for all of Montana. Daines stressed that without this bipartisan legislation, Montana’s farmers and ranchers would be faced with significant uncertainty. Department of the Interior Assistant Secretary Tim Petty agreed with Daines that the bill will protect Montana’s ag economy and highlighted its economic benefits.

Senator Jon Tester said in his opening remarks at the hearing, “This moment has been decades in the making. It does great things for building infrastructure both inside the reservation and outside, and it does great things for providing surety to towns and water owners across Montana… we need this water settlement for Montana. We need it for predictability, we need it for certainty, we need it to be able to grow our economy. Water is life – that’s how important it is.”

Before being implemented, Tribal water rights compacts must pass the state legislature and both chambers of Congress, and be approved by the Tribe and Montana water court. In 2015, after a decade of negotiations between CSKT, the State of Montana, and local landowners, the Montana legislature passed the bipartisan CSKT Water Compact. The Compact is supported by Tribes, landowners, farmers, ranchers, small businesses, sportsmen, and the Montana Legislature.

Montana Governor Steve Bullock called for swift passage of the legislation after the hearing on Wednesday. “I urge the Senate to get this bipartisan and equitable deal across the finish line to provide a path forward for all Montanans to gain certainty for their water rights,” Governor Bullock said. “This legislation avoids expensive litigation and offers significant funds to guarantee water infrastructure in western Montana is modernized to meet the future needs of all users.”

Lorents Grosfield, the Co-Chair of Farmers and Ranchers for Montana (FARM), commented, “We appreciate the work and time that both Senator Daines and Senator Tester have put into this agreement and we are excited that a solution to provide water right certainty to Montanans is now fully supported by the Trump Administration and is finally moving forward in Congress.”

FARM is a grassroots coalition committed to fair water policies and the implementation of the Montana Water Compact. Grosfield added, “This legislative solution will create jobs, protect our economy, and will ensure the availability of water for future generations of Montanans, while saving Montana taxpayers, farmers and ranchers millions of dollars.”