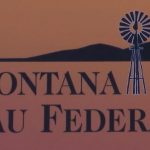 The Montana Farm Bureau Federation celebrated their centennial convention this week in Billings. Members from all over the state attended to take in the event and continue the work of the grass-roots organization that has represented farmers and ranchers for a century.

Hans McPherson, a diversified farmer from Stevensville, was re-elected as president of the statewide agriculture organization and Northern Ag Network’s Leif Bakken caught up with him during the convention to talk about the work the Farm Bureau does on behalf of farmers and ranchers.