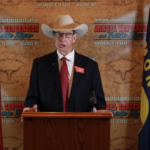 The Montana Stockgrowers Association (MSGA) wrapped up its first-ever Virtual Annual Convention & Trade Show on Wednesday, November 18. This one-of-a-kind event provided over 200 attendees the chance to gather for keynote addresses, explore a virtual trade show, vote for MSGA’s 2021 Board of Directors, and participate in policy development – all from their own home!

Attendees were able to bring policy forward and vote on resolutions by video chatting and sending messages in MSGA’s virtual event platform. One session, in which MSGA members had a lively debate, even racked up 534 comments as they discussed and voted on policy.

As the virtual convention came to a close on Tuesday, attendees gathered for General Session II where MSGA recognized four outgoing board members for their years of service and dedication to MSGA and the livestock industry:

“It’s been an absolute honor to serve this 136-year-old association,” said Fred Wacker, former MSGA President. “I thank you for allowing me to have the opportunity to be your president for the last two years and to represent the greatest livestock organization in the whole world and especially in the state of Montana.”

“To our members, I would like to thank you for your support, passion & dedication to this industry & this livestock organization,” said Jim Steinbeisser, newly elected MSGA President. “We need you. Not just one of us has all the answers, but together we can solve a lot of problems.”

The purpose of the Annual Convention & Trade Show is to provide education, information, fellowship, and an opportunity for the beef industry & MSGA members to set policy that will shape the landscape of cattle ranching in Montana.