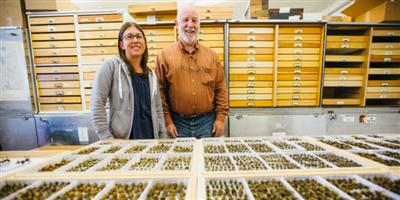 BOZEMAN – The first time a bumble bee was recorded in Montana was in the journals of the Lewis and Clark expedition in 1805. More than 200 years later, Montana State University faculty and a former graduate student say they now have compiled the state’s first inventory of bumble bees known to live in Montana, and their research reveals the largest number of bumble bee species known from any state in the nation.

The group’s research is detailed in a paper, “Bumble Bees of Montana,” which was published this week in the Annals of the Entomological Society of America (AESA), the country’s flagship entomology journal. The paper’s co-authors were Michael Ivie, associate professor of entomology in the MSU Department of Plant Sciences and Plant Pathology, Kevin O’Neill, professor of entomology in the MSU Department of Land Resources and Environmental Sciences, Casey Delphia, MSU research scientist, and Amelia Dolan, former MSU entomology graduate student, all within the MSU College of Agriculture.

“Because of Montana’s size, landscape diversity and regional junction of eastern and western geographies, when it comes to bumble bees, Montana hosts a diverse, large and globally relevant community of species,” Ivie said. “Our research shows 28 different species of Bombus, with four more expected to make the list. That’s the largest number of bumble bee species recorded for a state in the entire country.”

Ivie added that the research project greatly expanded the known distribution of the bumble bee species within Montana, with at least four species now documented from each of Montana’s 56 counties.

To get to that number, a research group that included Dolan, Delphia, Ivie and O’Neill used existing specimens in the Montana Agricultural Experiment Station’s Montana Entomology Collection, those from a variety of existing MSU faculty projects and material in other museums. Then, they enlisted a host of MSU faculty, staff, students and alumni from across the campus and around the state to collect and contribute specimens from under-sampled areas. Collaborators from the Montana Agricultural Experiment Stations (located at seven different research centers across the state), statewide MSU Extension agents and specialists, Montana Master Gardeners, hobby entomologists, hikers, and U.S. Geological Survey researchers all pitched in, greatly expanding the areas represented in the database.

“The specimen gathering was a large effort,” Dolan said. “We reached out to (a) wide group of people who have an interest in entomology (and gave them directions for catching specimens), who would be out and about in Montana for the summer for potential specimen collection. The turnout of people willing to collect specimens and send them in was exciting.

“It was amazing because we had people collecting specimens across the state, in varying elevations and diverse ecosystems – areas we alone wouldn’t have had access to in the time that we had to complete the project,” Dolan said. “The number of species is representative of Montana’s wild spaces and diverse landscapes that host these bees.”

Once the MSU researchers cleaned, examined and identified the specimens, Dolan and Delphia pored over bumble bee research records spanning 125 years and 25 natural history collections. They consulted with national bee labs and compared data sets so they could accurately identify and document specimens.

Because so little is known about bumble bees in Montana, much of the species identification was tedious, and it took a lot of comparing and contrasting with other collections, Delphia said. Especially difficult specimens were sent to a world expert at the University of California, Davis, for verification.

“Montana is a bit of a black hole when it comes to bee species records and information, so you’re working with very little documentation to begin with,” Delphia said. “Our taxonomic work for the bumble bees had to be referenced with other museums and collections because there isn’t a baseline summary of what’s already here.”

Delphia said the bumble bees of Montana collection is an important beginning in understanding and identifying the rest of the state’s native bee species.

“It’s an exciting time to work in pollinator research, especially in Montana, because we still don’t have an accurate idea of what native bee species are here,” she said. “Many people ask if Montana bees reflect a national bee decline, but we can’t answer that without first knowing what’s already here. This is the first step to understanding and documenting what other bee species might be here, so we can start looking at bigger questions.”

That Montana has the largest number of bumble bee species of any state in the country is of scientific importance, Ivie said.

“Having a baseline record of bumble bee populations in a state that reflects both western and eastern geographies has major global impacts when it comes to pollinator research,” Ivie said. “Nationally, bees in general, and bumble bees specifically, are in decline, and they serve as critical pollinators for the world’s food supply. The first step towards understanding measures to protect them is to understand what their species numbers look like so that we can build on monitoring efforts.”

Dolan said the idea to document Montana’s bumble bee communities stemmed from a project during her time as a graduate student in MSU’s entomology program. Funded in part by a Montana Department of Agriculture Specialty Crop Block Grant and the Montana Agricultural Experiment Station, Dolan was researching insects associated with Montana’s economically and culturally valuable native huckleberry plant.

“We started seeing that the book’s species’ maps didn’t quite match what I was seeing in the field,” Dolan said. “We started to wonder if the bumble bee specimen data I was collecting for my huckleberry research might be applied to larger-scale, statewide faunal inventory.”

In fact, the AESA paper largely stemmed from Dolan’s master’s thesis on pollinators associated with the huckleberry plant and industry as a graduate student at MSU, according to Ivie. Dolan now works at Athlos Academies, a charter school management company, in Boise, Idaho.

“Anytime we have graduate students doing meaningful work, and they get that work published in the top national journal of their field on a globally relevant topic, that means we’re doing good work,” he said.

“The new bumble bee collections are a wonderful addition to the already-large specimen collection here, and we hope students of all levels and other research programs relevant to pollinators take advantage,” Ivie said.

MSU is home to a new Center for Pollinator Research, a research group of faculty from different disciplines focused on improving pollinator health and mitigating pollinator losses through research, education, and outreach. The documentation of Montana’s pollinator diversity, with projects like this one, are a baseline foundation for such work.

Caption: A group of MSU researchers have published a paper, “Bumble Bees of Montana,” in the Annals of the Entomological Society of America. The paper's co-authors were Michael Ivie, associate professor of entomology in the MSU Department of Plant Sciences and Plant Pathology, Kevin O'Neill, professor of entomology in the MSU Department of Land Resources and Environmental Sciences, Casey Delphia, MSU research scientist, and Amelia Dolan, former MSU entomology graduate student, all within the MSU College of Agriculture. Delphia, left, is pictured here with Ivie. MSU photo by Adrian Sanchez-Gonzalez.