Note from Daughter Courtney Brown Kibblewhite – “We are sincerely grateful to everyone who wrote letters and supported our Dad’s nomination. It sure means a great deal. Especially since Colter and I came back to our business, we have seen Dad receive all kind of awards of course, but I do have to say there is something particular about this one. I don’t think it has a bit to do with the ‘Doctor’ title, though he loves to tease us about it! After a healthy family, I suppose what else could one ask for in life besides the opportunity and ability to give back to the people and places for which you care so deeply? Some have the opportunity, some have the ability, but few act. Thank you, Dad for continuing to step up. I know you don’t mind at all who gets the credit, but I thank God for the joy we feel in seeing credit given where credit is due.”

Today the state’s Board of Regents approved an honorary doctorate for Brown, a third-generation Montana rancher from Sand Springs and a two-term state senator. Brown has also had a prominent career in television and radio broadcasting spanning more than 40 years.

Brown was born in Sheridan, Wyoming, and grew up on his family’s cattle ranch in eastern Montana near Sand Springs. He attended high school in Lewistown and received a bachelor’s degree in animal science from MSU, where he also served a year as student body president. 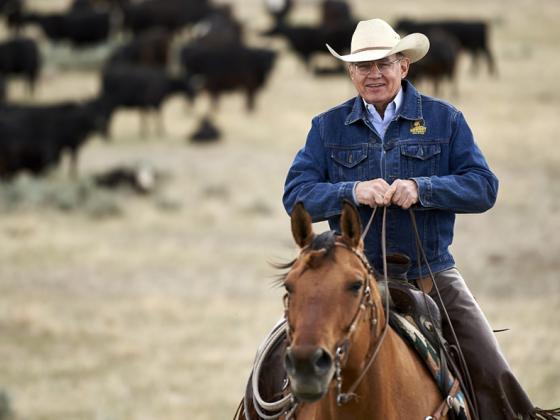 After graduation, Brown returned to his family’s ranch, then started his broadcasting career in Billings as a farm broadcaster with Northern Broadcasting System. He and his wife, Shannon, later purchased the radio network in 1985 from future U.S. Senator Conrad Burns. Today Northern Broadcasting includes the Northern Ag Network, the Northern News Network and flagship radio station KGHL AM-790 and FM 94.7. It provides radio, television and digital content dealing with agriculture, markets, state news and weather to approximately 70 stations in four states. As a result, Brown has been regarded for decades as one of Montana’s most recognizable radio voices, particularly in rural areas.

“It would not be exaggerating to say that today virtually every farmer, rancher and agribusiness person in the state of Montana knows of Taylor Brown and his involvement with agriculture and public education,” Pat Hatfield, former head of the Department of Animal and Range Sciences in the MSU College of Agriculture, wrote in materials nominating Brown for the honorary doctorate.

Brown served two terms as a state senator from 2009 to 2016, where he represented Montana Senate District 22. As a legislator, he chaired both the agriculture and education committees and served as majority whip. He was known in the Legislature as a supporter of agriculture, Montana State University, MSU Extension and the Montana Agricultural Experiment Station.

During his time in the Montana Legislature, Brown helped to lower business equipment taxes and worked to significantly reform worker’s compensation costs. He helped restore critical investment in ag research and worked to increase support for career and technical education. Brown was also a champion for the creation of the WIMU Regional Program in veterinary medicine, which helps Montana resident students receive a reasonably priced veterinary education. He was also important to passing funding to expand the WWAMI Medical Education Program for the first time in 40 years, allowing entering classes to grow from 20 Montana resident students per year to 30. Brown led the effort for the Montana University System’s first performance-based funding, and he supported holding tuition costs steady for Montana students and their families during the 2013 and 2015 Legislatures.

Hatfield said that Brown has committed himself to sustaining agriculture in Montana through service and outreach. Brown is an advocate for rural farm and ranch families and is a supporter of 4-H, FFA, the Alpha Gamma Rho fraternity and the REAL Montana leadership program. In 2009, Brown launched an agriculture information website, northernag.net, and he is also a past president of the National Association of Farm Broadcasters.

“Anyone who knows or works with Taylor Brown in any capacity knows how much he gives personally to a great many causes, and how he uses his own company as an example of the way business leaders can make a difference,” Hatfield wrote. “Not only does he donate generously of his personal time but he gives direct financial support to many worthwhile programs. He volunteers the powerful voice of his network, and its many affiliated radio and television stations, to generate unparalleled support for a long list of community service projects.”

Brown played a major part in securing private funding for MSU’s Animal Bioscience Building, which was completed in 2010. As the first chairman of the MSU College of Agriculture Development Board, Brown headed a grassroots effort to raise approximately $9 million of the $15.7 million needed for the building, rallying nearly 200 ranchers and businesses to help fund the facility. The building is now the permanent home of the MSU Department of Animal and Range Sciences.

“Taylor was an invaluable advocate for the Animal Bioscience Building,” MSU Alumni Foundation CEO and President Chris Murray wrote in a letter supporting Brown’s honorary doctorate nomination. “It was his loyalty, diligence and time which helped to ensure this building became a reality.”

I’m a little late but I offer a most hearty CONGRATULATIONS!!!
to a very deserving individual.