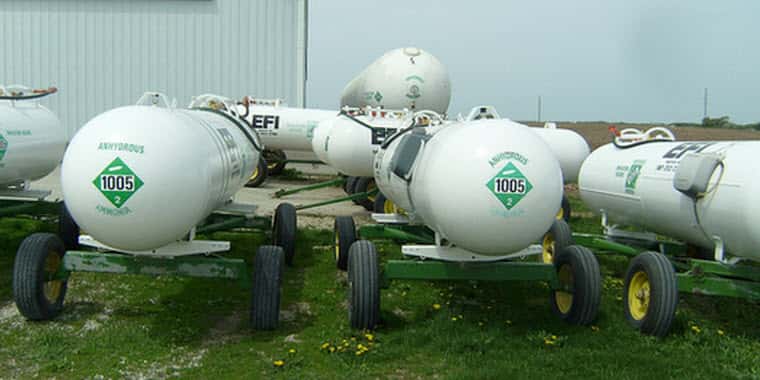 OMAHA (DTN) — Adam Casner is concerned that soon it will be tougher for him to find anhydrous ammonia in his area.

The Carrollton, Missouri, farmer received notice recently that one of his local fertilizer retailers has decided to stop selling anhydrous ammonia, the most economical form of nitrogen fertilizer for crops.

The retailer said it's giving up on ammonia due to coming changes to Occupational Safety and Health Administration (OSHA) policies regarding how ammonia is regulated for fertilizer retailers, Casner said.

This leaves farmers like Casner with one less option when it comes to nitrogen fertilizer.

At that point, OSHA decided to revise the interpretation of the exemption of retail facilities from Process Safety Management of Highly Hazardous Chemicals (PSM) regulations. The agency wants to eliminate the retail exemption for fertilizer retailers, which would subject retailers to new programs and safety rules. This, in turn, could end up costing retailers money in major renovations. Some smaller retailers may just stop selling ammonia.

The deadline for retailers to comply with the OSHA policy change is Dec. 31, 2015.

Daren Coppock, CEO and president of the American Retailers Association (ARA), told DTN the first step for retailers if this policy change takes effect would be doing all the paperwork. That would include getting plans together, preparing diagrams, etc., so they are ready when an OSHA inspector would visit, he said.

Then, if the PSM paperwork and planning process identifies s are out of compliance or finds other physical issues, facility changes would then need to be made, Coppock said.

The OSHA website estimates the policy change will affect 4,800 fertilizer retailers across the country. The policy doesn't affect businesses, such as gas stations, that sell small volumes of chemicals.

Repeated requests by DTN for OSHA comments on the policy change went unanswered.

“The change will affect anyone who handles anhydrous ammonia,” Coppock said. “Although, if OSHA doesn't relent, that number is going to get a lot smaller — one of our larger members estimates that they will end up closing a third of their ammonia facilities.”

Coppock said his organization and The Fertilizer Institute (TFI) have jointly filed legal action in the U.S. Court of Appeals against the OSHA memorandum withdrawing the retail PSM exemption. The groups also have 18 fertilizer retailers joining the suit as co-petitioners.

The ARA and TFI have several issues with the OSHA policy change, Coppock said. Among them is that the six-month implementation period is not long enough for retailers to make these extensive changes. Retailers don't have adequate time to implement this magnitude of regulatory changes, he said.

In addition, OSHA is changing the policy regarding anhydrous ammonia while the West explosion was caused by ammonium nitrate. ARA wants to see data to demonstrate a track record of problems with ammonia, Coppock said.

Cost estimates for these changes are another area of contention for ARA and TFI. Industry experts say the costs will be considerably higher than OSHA estimates, Coppock said. ARA reports estimates would cost in excess of $20,000 per site, while the OSHA estimate is $2,160 per site.

“We have yet to hear back from OSHA regarding all of these concerns,” Coppock said.

One person who doesn't believe OSHA's cost estimate one bit is Doug Goehring, North Dakota Agriculture Commissioner. North Dakota has 283 fertilizer retail facilities that would be affected by the possible change, including 275 retailers and eight manufacturing and wholesale distribution facilities.

Goehring said he has had conversations with some of the eight wholesale and manufacturing facilities' owners within his state. He said they told him several have already gotten bids to implement the proposed changes, and the cost was $77,000 per location.

Goehring said he considered legal options against OSHA but will not pursue that option now that ARA and TFI have filed suit against the agency. He said he fully supports the ARA and TFI legal battle with OSHA.

“OSHA needs to either withdraw or redo this policy change, as this doubles the paperwork for retailers and does nothing to enhance safety,” he said.

One fertilizer retailer watching the situation closely is Bob Spratt, who manages LeRoy Fertilizer Services located in LeRoy, Illinois. While he operates his business as safely as possible, he is concerned about the changes proposed by OSHA.

These regulation changes are not welcome news for smaller retailers already struggling to survive. The cost of making these changes could drive some retailers out of the ammonia business for sure and some completely out of business, he said.

“I've said for a few years now that anhydrous ammonia won't be outright banned, but the regulations will just make it so hard to keep it,” Spratt said. “The fertilizer retailers will just get rid of it on their own.”

The additional costs would likely end up back on the farm and affect farmers who are already face razor-thin crop margins. Farmers could be forced to change the form of nitrogen they use, which would mean different application equipment.

Casner said he could use other forms of nitrogen in his Missouri farming operation, but it would require some major changes. It would also come with a high price tag.

“I don't mind using liquid N, but our equipment is not set up for it currently, and it would cost a lot of money to convert our equipment or buy new equipment,” Casner said.

Casner also wonders what effect the OSHA regulation changes would have on the price of nitrogen fertilizers as a whole. If farmers lose anhydrous ammonia, he wonders what will happen to the price of the remaining nitrogen sources.

“Mind you, several of the alternate nitrogen sources require anhydrous ammonia to produce,” he said.