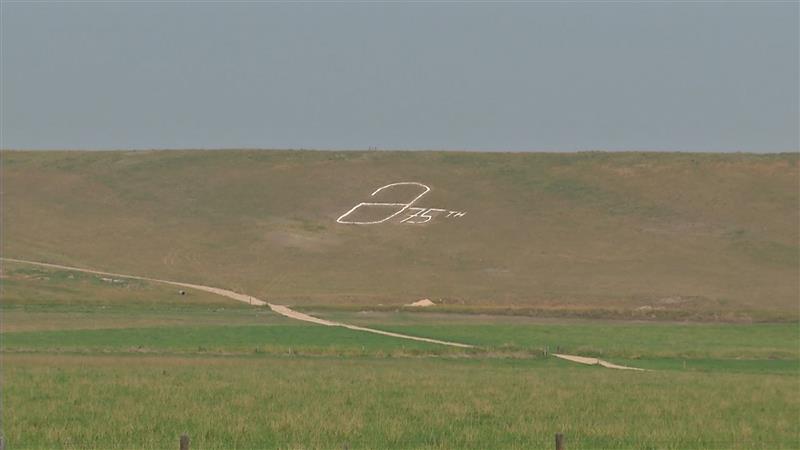 The Padlock Ranch was established by Homer and Mildred Scott in 1943 in Dayton, WY, where the headquarters are still located. Homer started with about 3000 acres and 300 head of cattle and the ranch is still owned by the Scott family but has grown tremendously since its establishment.

It now encompasses more than 450,000 acres in both Montana and Wyoming where they run over 10,000 head of cattle.

Trey Patterson is the Padlock Ranch’s CEO and says their very proud to be celebrating the ranch’s 75th anniversary here in 2018.

“We’re excited to be celebrating 75 years” said Patterson. “From a ranch that started in the early 40’s with really humble beginnings to grow where we’re at today and to be a profitable business and to be operating in northern Wyoming and southern Montana. The Scott Family who owns the ranch is here celebrating with us and they’re sure proud of it and we are to. It’s a special place.”

Jim Scott is the youngest of Homer and Mildred’s children and says the ranch’s success really can be traced back to two very important philosophies that his father believed in and are still practiced today.

“One of the things that I think he believed from the beginning and we continue to believe is success depends on having wonderful people” said Scott. “And then if you’re in it for the long-term, you have to take care of what you have. And so, stewardship has been one of our ethics.”

The Padlock Ranch has been recognized in both Montana and Wyoming for its environmental stewardship and also on the national level as the Environmental Stewardship Award winner for Region 5.

John Heyneman is chairman of the Padlock’s Ranch’s board of directors and grandson of Homer and Mildred and he says they’re very proud of this recognition.

“We’re very proud of and its one that the family had a lot of voice in” said Heyneman. “One of the things that the Padlock Ranch Board of Directors does is to be a conduit for the family’s voice. And we have a lot of family members who care deeply about environmental issues and that manifested itself giving messages to Trey Patterson at the CEO level and we took on some really interesting projects that ended up us winning some environmental recognition.”

Sense of community is also very important to the Padlock Ranch which they continue to exemplify every day in both Montana and Wyoming.

The Scott Family is also celebrating the 50th Anniversary of their First Interstate BancSystem which got its humble beginnings as a single bank in Sheridan, Wyoming and now includes over 120 banking offices along with online and mobile banking services throughout Idaho, Montana, Oregon, South Dakota, Washington and Wyoming.